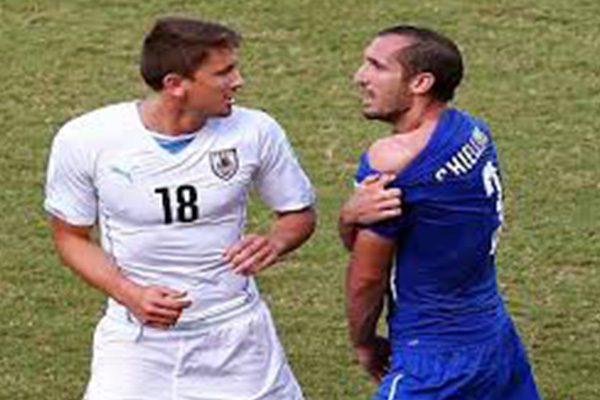 CNN — Luis Suarez, a player of unquestionable talent but with an unfortunate tendency to bite, now faces disciplinary action from soccer’s governing body after he appeared to sink his teeth into an opponent yet again.

FIFA said Wednesday that it has begun proceedings after the Uruguay striker was accused of biting another player during his team’s World Cup victory over Italy a day earlier.

Television pictures showed Suarez dipping his head toward Italy defender Giorgio Chiellini, sending both men tumbling to the ground. When the Italian defender eventually got up, he pulled down his shirt and furiously indicated he had been bitten on the shoulder.

Suarez, 27, has already been banned twice in his career for his wayward teeth. But those offenses happened in club-level games.

Tuesday’s incident was during soccer’s biggest spectacle, in front of an audience of millions. And whether he’s ultimately found guilty, Suarez’s teeth baring now takes its place in the annals of World Cup controversy, along with Diego Maradona’s “hand of God” goal and Zinedine Zidane’s headbutt.

Suarez and the Uruguayan Football Association have until 5 p.m. Brasilia time (4 p.m. ET) Wednesday “to provide their position and any documentary evidence they deem relevant” to the disciplinary proceedings, FIFA said