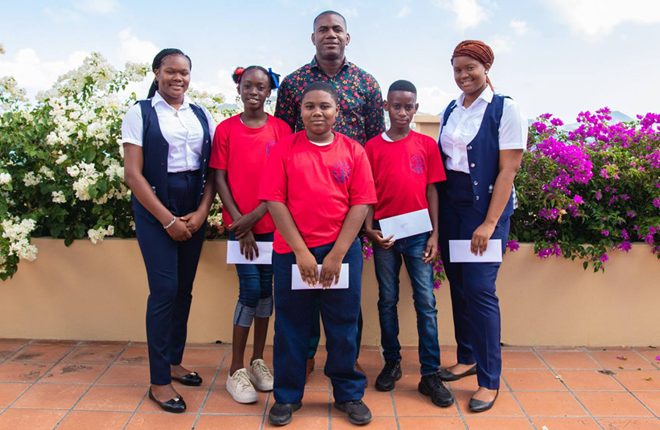 Deputy Prime Minister and Minister of Education, Hon. Shawn K. Richards, while expressing his delight and sense of fulfilment declared, “The awards are intended for children who are demonstrating academic promise and who are in need of financial assistance.”

The recipients were chosen by a selection committee based on their commitment to academic excellence, extracurricular and community based activities and family composition.

The awards were presented to students at key transition periods in their academic pursuits. That is they recently went from Sandy Point Primary to Charles E. Mills Secondary (C.E.M.S.S.) to the Clarence Fitzroy Bryant College (CFBC).

Dr. Tricia Esdaille, Senior Assistant Secretary announced the awardees and added, “The Selection Committee was particularly moved by one of the applicants in first form of the Charles E. Mills Secondary School and decided to secure sponsorship of a special award of equal value to the award given to the two (2) first formers. The selection Committee’s special award goes to Mr. Jahiem Buchanan.”

This festive occasion was a time for children within the schools to engage the Minister and discuss issues pertinent not only to the academic achievements but also on a community based level.

Minister Richards stated, while addressing a student’s question, “There are a number of projects were a looking at, namely a high school (CEMSS) to accommodate the students who are involved in the arts. The TVET program is also coming on stream, some equipment was distributed to all the high schools as part of the TVET enhancement project.”

The Deputy Prime Minister’s Annual Breakfast is an occasion for the Minister to recognize the achievements of students within his constituency and for his team to encourage students to pursue their academic goals.