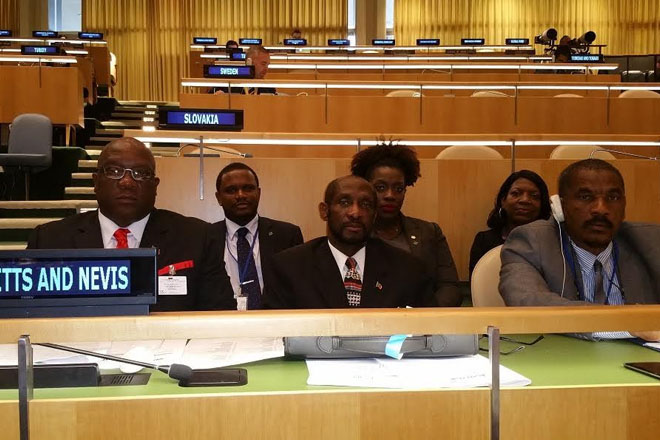 Basseterre, St. Kitts (SKNIS) — Speaking at the 70th Regular Session of the United Nations, a Summit with the theme “Transforming our World”, which focused on the adoption of the post-2015 development agenda with special attention given to sustainable development goals to be achieved by 2030, Prime Minister of St. Kitts and Nevis, Dr. the Honourable Timothy Harris told the United Nations General Assembly in New York on September 26th that his Government of National Unity is fully committed to Sustainable Development goals.

“The pursuit of the Post-2015 Development Agenda and SDG 2030 is an organic process for us simply because in St. Kitts and Nevis, we have a people-centered government. It is a government focused on working for the sustainable development of our people. We are continuing to increase access for all too high quality healthcare; upgrading the delivery, rigor and relevance of primary and secondary education – which is compulsory for all children from ages five to sixteen,” Prime Minister Harris said.

The Prime Minister underscored the point that his Government is reforming laws that will bring about economic sustainability, which will lead to a better quality of life, especially for young people through work opportunities that would enhance their human dignity.

“We are determined to preserve the dignity and human rights of our people. We will champion policies for good governance, transparency, social equity, justice, security and prosperity for all,” he said.

Dr. Harris emphasized the fact that Small Island Developing States (SIDS) are vulnerable to climate change and rising ocean and seas that could result in eroded coastlines which can affect the tourism industry upon which so many SIDS rely for their livelihood. He also said that as a result of climate change, droughts are happening more frequently.

“Dominica’s devastation by Tropical Storm Erika highlights the vulnerability of SIDS and why development cannot be taken for granted. It also makes a cogent point that the graduation of SIDS on basis of per capita income is imprudent in the context of our vulnerability,” he said.

“This year for example, we in St Kitts and Nevis suffered one of the most prolonged and severe drought spells. The consequence has been water rationing for the consuming public,” said Prime Minister Harris noting that “we are witnessing the destruction to our livelihood by natural disasters and sea level rise” and that “we do not know from one year to the next which island will be devastated or set back decades in development.”

Stating that the response to climate change requires contributions from countries large and small, Dr. Harris made a plea to the august body to include Taiwan’s input.

“Taiwan with its advanced renewable energy technologies should be allowed to participate in relevant international meetings and mechanisms such as the UNFCCC and the UN Environmental Assembly,” he said.

He spoke to the importance of protecting our coral reefs, refraining from polluting our oceans and over-exploitation as unsustainable practices that can threaten our “economic, social and environmental well-being.”

The Prime Minister also underlined that renewable energy and food security contribute to sustainable development and that St. Kitts and Nevis have been taking steps in the exploration and implementation of geothermal, wind and solar energy “to optimize the synergies.”

The Prime Minister told the United Nations General Assembly that his Government promises “a fair share for all” and wants to see our people succeed.

He underscored the importance of international financing for sustainable development of SIDS.

“We will design more programs to promote healthier lives and lifestyles; to eradicate poverty, enhance quality education, and ensure gender equality and human rights for all,” Prime Minister Harris said.