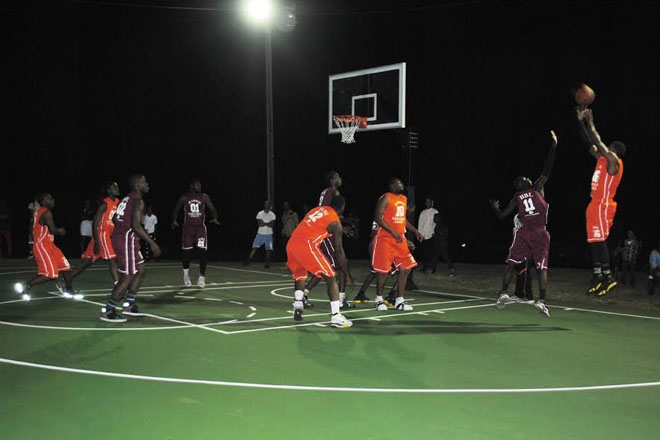 Basseterre, St. Kitts — Defending champions in the Harris Basketball League, Strivers Basketball Club, sent out an early warning that they intend to retain the title in 2015 when in the second game played on Saturday October 10th they beat Ballaholics 63-55.

When the league opened on the refurbished Molineux hard courts, the first game was between Inner City Ballers and Ottleys. Despite producing a sensational dunk shot, courtesy of Joshio ‘Biggie’ Morton, Ottleys went down 56-62.

The first two games on Saturday evening were watched by among others, Prime Minister and perennial league sponsor, the Hon Dr Timothy Harris, veteran basketball administrator Mr James ‘Barman’ Hanley, and a representative of one of the new sponsors Koi Resorts | Residences, Mr Naeem John.

Strivers, a team which has in its line-up last year’s MVP Nashorn Maynard had a lucky escape as they narrowly led in the first quarter 16-14 and second quarter 28-27 and were surprisingly held 40-40 at the end of third quarter. They however put experience into play and at the end of the fourth quarter they led comfortably at 63-55.

Game four was played Tuesday evening (October 13th) which saw Redemption Squad arrest Free Up 72-54. The game was only close in the first quarters where Free Up actually led 15-14, but the Redemption Squad quickly upturned the tables to lead 34-29 at half time, 54-48 at end of the third quarters, and then pulled off and widened the lead to a 72-54 win.

The league continues Wednesday (October 14th) evening with a game between Tabernacle and Inner City Ballers, on Thursday evening between Ottleys and Ballaholics, while there will be two games on Saturday (October 17th), the first between Strivers and Ottleys at 7:00 p.m., and the second between Last Dance and Free Up at 8:30 p.m.