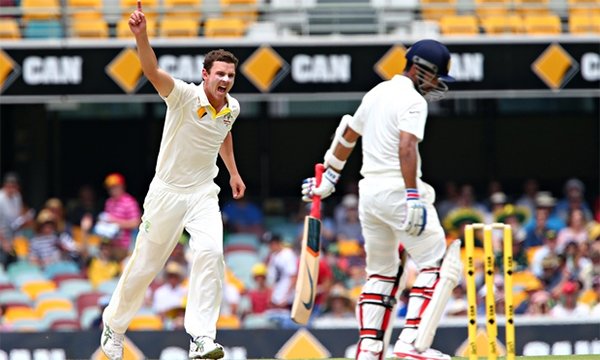 Sports Page — First India then Australia: neither side was able to take control on day two of the second Test in muggy Brisbane.

The visitors’ loss of six for 87 at the steady hands of Josh Hazlewood gave the hosts a better sight of the batting crease than they could have expected after day one, but a trio of wickets to the speedy Umesh Yadav left the captain Steven Smith a little shorter of support than he would have preferred. Storms threatened all day but it was ultimately poor light that brought the day to an early close.

India’s captain MS Dhoni was arguably the more content of the two captains, having made enough incisions to expect the possibility of a first innings lead on day three. Indiscriminate strokes meant that David Warner and Shane Watson both squandered strong starts, and Chris Rogers was cramped and then caught by Dhoni from the fast and hostile Umesh as refreshments were being served.

Much now rests on the shoulders of Smith, who looked in sublime touch on his way to an unbeaten 65 but also lost Shaun Marsh, for once making neither a duck nor a hundred for Australia. Warner seemed intent on replicating his twin hundreds in Adelaide, helped once again by India’s curious preference for bowling around the wicket to him.