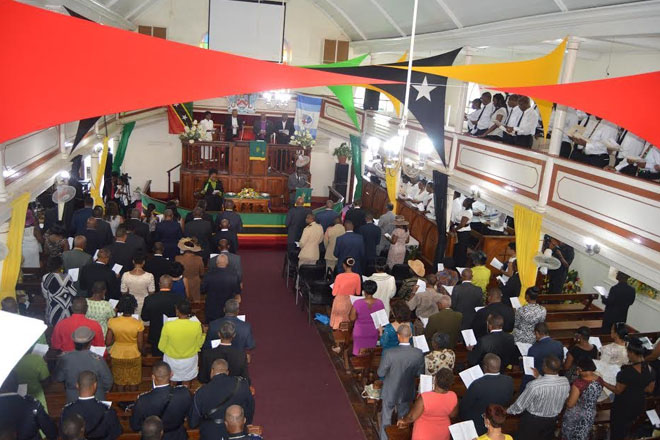 Basseterre, St. Kitts (SKNIS) — Three ferries, the M.V. Sea Hustler, the M.V. Caribe Queen and the M.V. Lady B, left St. Kitts on Sunday afternoon, September 13th, with throngs of Kittitians for the historic journey to Nevis to attend the Independence State Service, something that has never happened before in the 32 year history of the Federation’s independence celebrations.

The Charlestown Methodist Church was bursting at the seams with nationals and patrons who wanted to be there to make history. As the procession of clergy and flag bearers made their way to the altar, the National Mass Choir, directed by Mr. Clyde Richardson with Mr. Wayne Moore, belted out the Introit, a piece dubbed “This Day”. The Nevis Christian Council then led the Call to Worship before the entrance hymn “Come Let Us All Unite and Sing”.

Leader of the Opposition, the Honourable Dr. Denzil Douglas, read the Old Testament lesson from Nehemiah 2:17-20; 4-6, while the Prime Minister, Dr. the Honourable Timothy Harris recited the second reading from 2 Corinthians 5: 16-21. Major Roxroy Campbell of the Salvation Army read the Gospel which was taken from John 15: 1-8.

In his sermon, Pastor Arthur Freeman of the Nevis Church of God of Prophecy underscored the importance of nation-building. Pastor Freeman made a plea for citizens to work together despite their political affiliations.

“Regardless of your political affiliation, let’s work together to build this nation because this is our nation,” he said. “In building you will have opposition, strong opposition, but the thing is that we have got to learn to respect the views and the ideas of the other person…it doesn’t mean that something is wrong with your ideas, but two together go a long way.”

The preacher emphasized that nation-building was not easy and that there will be failure but we must persevere.

He also implored the Federation’s leaders to consult God in their decision making.

“In all of your building, don’t leave out the master builder. Except the Lord build the house, they labour in vain that build it,” he said.

“Nation-building is not a one person job. It is for every individual, every citizen to put your hands to the plough, your shoulders to the wheel and do something to help your nation to go forward,” he said.

The Blessing of Offering was said by Pastor Marcia Thomlinson of the Wesleyan Holiness Church, Nevis.

The St. Kitts Christian Council said the Prayer of Thanksgiving before the singing of the National Anthem.

Archdeacon Valentine Hodge of St. George’s Anglican Church pronounced the final blessing before the recessional hymn “Now Thank We All Our God.”