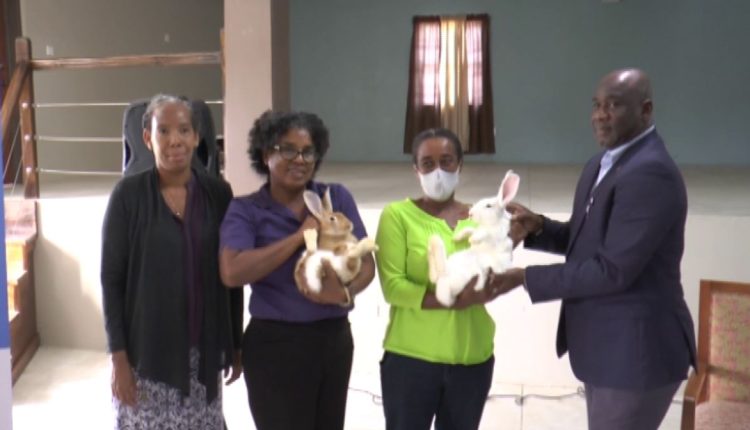 Representative of the IICA Delegation in St. Kitts and Nevis, Sharon Jones explained how this initiative came about.

The Director General of IICA approached the Caribbean member nations to offer assistance, the Department of Agriculture in St. Kitts responded to that offer and was interested in reducing the burden of food nutrition at the household, they identified the importance of growing a local source of animal protein that will sustain the population, with all the discussion they came up with rabbit rearing.”

She said that not only is rabbit meat healthy, it can also be a viable source of income.

“Rabbit meat is also very healthy and nutritious meal, low in cholesterol, low in fat and I am told that in St. Marten and French countries 1 pound of meat sells at US$ 25 so it is a very good initiative to go on in terms if an industry so with this start I hope each and every one of us considers it not just as a way of supplementing our food but also investing in it as a start to a very viable venture.”

Minister of Agriculture, Fisheries and Marine Resources, Hon. Alexis Jeffers said that post-Covid-19 we should be able to sustain ourselves through initiatives such as the Rabbit Rearing Project.

“This particular project that is being launched today is one such lessons that we can certainly learn from in terms of implementing it so that in the next six months and beyond at whatever stage we’re at I’m hoping that we’re at a point where we can say that on the 13th day of October we launched this project and we’re able to reap some semblance of a harvest in a few months or in a few years.”

He added that children can also get involved in rabbit rearing as a means of assisting with the provision of food to the household.

Following the Minister’s remarks a presentation was done on the Introduction Of Rabbit Production by Livestock Production Officer, Jeffrey Berry.