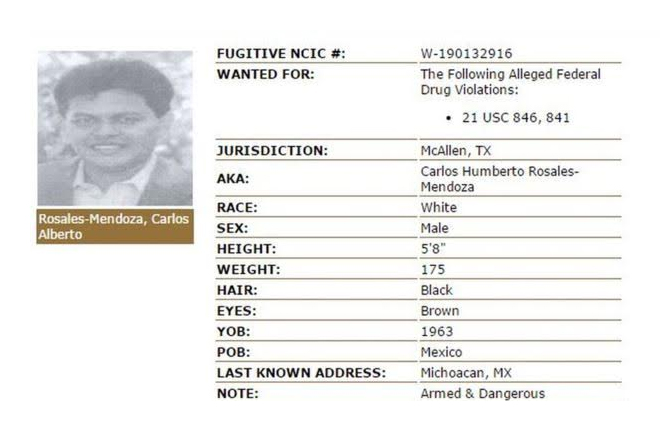 (BBC) Carlos Rosales Mendoza, the founder of one of Mexico’s most violent drug cartels, has been killed.

Rosales Mendoza’s body was found along with three other bodies by a motorway in western Mexico.

All four victims had been shot dead, forensic experts said.

Rosales Mendoza, 52, was one of the founders of La Familia Michoacana, a drug cartel with a reputation for extreme violence which claims to defend family and religious values.

He was on the US Drug Enforcement Agency (DEA)’s most wanted list.

The four bodies were found in the car park of a tollbooth on a motorway in the western state of Morelia.

Forensic experts said the four had been tortured and killed somewhere else before their bodies were dumped in the car park.

It is not clear who may be behind the killing.

Rosales Mendoza is believed to have got involved in drug trafficking in the 1980s in the western state of Michoacan.

He rose through the ranks of local drug gangs and forged key alliances with members of the Gulf and Zetas cartels.

In 2000, he founded his own organisation, which he named La Familia Michoacana (The Michoacan Family) after the state that was his power base.

La Familia became a powerful criminal force in Michoacan. Cartel members trafficked in drugs, but were urged not to use them themselves.

The cartel claimed to protect the poor and said it defended traditional family values.

Its hit-men said they had the “divine right” to kill and dismember their enemies, which included members of rival gangs.

Rosales Mendoza is believed to have trained some of the men who later became powerful drug lords in their own right, including Servando “La Tuta” Gomez,Enrique “El Kike” Plancarte, Nazario Moreno and Dionicio “El Tio” Loya Plancarte.

In 2004, he organised an armed assault on a maximum security prison to spring a jailed ally from the Gulf cartel.

His men managed to free 25 inmates, but Rosales Mendoza was arrested on suspicion of masterminding the jailbreak and spent the next decade in prison.

While Rosales Mendoza was in prison, the men he had trained founded their own cartel, which they called the Knights Templar.

The Knights Templar, which claimed to follow in the footsteps of the Christian military order of the Middle Ages of the same name, soon became one of the main targets for the Mexican government.

Police say the cartel has been dismantled after all four of its main leaders were arrested or killed in the past two tears.

The security forces feared that Rosales Mendoza was trying to re-organise his drug-trafficking empire after his release from prison in 2014.