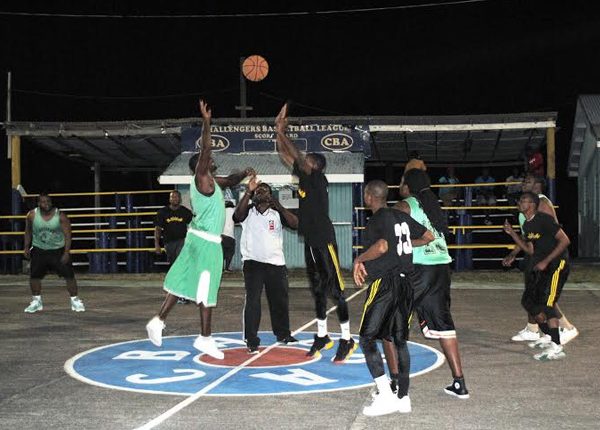 Basseterre, St. Kitts — At the end of the sixth day of play in the Development Bank Challengers Exodus Basketball League Tuesday evening March 10, unbeaten Kittitian Hill Lions and Bad Boyz were the joint early leaders after each would have amassed a total of 9 points from three games.

However, their supremacy will be put to test on Saturday March 14 when these two unbeaten sides will meet at the Challengers Hard Courts, in what Challengers Exodus Basketball Team Manager Mr Roger Gumbs has promised to be an epic game not to be missed.

Bad Boyz reported to the courts with mixed feelings. Their game against Exodus Alliance was initially meant to be the second game of the evening, but because members of one of the teams supposed to play first game were involved in a football game at Sandy Point, Bad Boyz and Exodus Alliance were asked to get to the court first, causing the game to start late.

Their star player Javal Hodge did not step onto the courts as he was on the benches side lined by an ankle injury from the previous evening. It was a very tight game as they only edged out the spirited Exodus Alliance by a single point, 54-53, a win nonetheless.

The games, which are being refereed by Nigel ‘Jades’ Burroughs, Rawlston ‘Speed’ Richardson, Shawn ‘Shabba’ Forbes, and Troy Merritt, continue on Thursday March 12 with Runners taking on Exodus Alliance at 6:30 pm, and Heights taking on Wolf Pack at 8:00 pm.