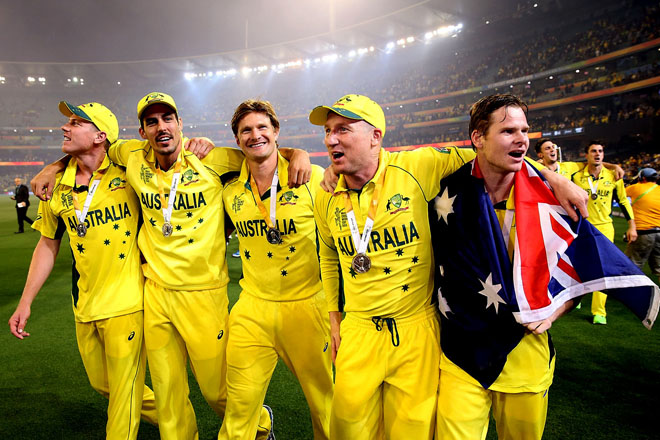 Sports Page — It had been the World Cup of short balls. On a flat MCG deck, it had seemed bounce would be the bowlers’ major ally. But so cocksure were Australia’s pace phalanx of their quality, they left nothing to the vagaries of the surface, firing balls full, fast and straight to deliver Australia a seven-wicket win and its fifth World Cup in comprehensive fashion.

Mitchell Starc and Mitchell Johnson shared five wickets, having sent down several spells of searing, swinging yorkers between them, and James Faulkner – slower but cannier than the other left-armers – claimed three scalps for himself. In all, eight wickets fell to full deliveries as New Zealand were felled for 183 in the 45th over.

There were early nerves in the chase, particularly when Aaron Finch fell in the second over, but Michael Clarke and Steven Smith stroked fluent half-centuries to run the target down inside 34 overs. Clarke, the departing captain, had a standing ovation when he left the field after his sparkling 74 from 72. Smith, his most likely successor, stayed at the crease to hit the last ball of the World Cup through deep square leg for four.