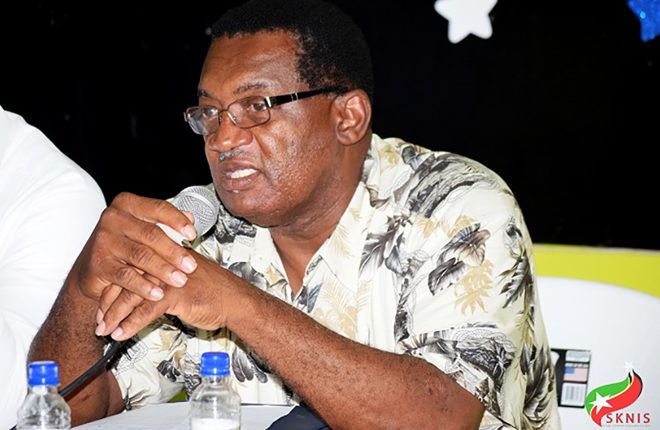 Minister Hamilton: Douglas no longer eligible to serve in parliament

(Press Unit in the Office of the Prime Minister) – Members of the Team Unity Cabinet continue to air their concern and disapproval of the Leader of the Opposition, Dr. Denzil Douglas being the holder of a Diplomatic Passport of the Commonwealth of Dominica while at the same time sitting as a Parliamentary Representative.

The latest Cabinet member to publicly air his concern on this serious matter was the Honourable Eugene Hamilton, Parliamentary Representative for Constituency #8, when he addressed the audience at the Constituency #7 town hall meeting at the Edgar T. Morris Primary School in Tabernacle on Sunday, 5th November 2017.

Minister Hamilton said he, of all the ministers, is qualified to speak on this matter, as he reminded those in attendance of the court action taken against him by the Denzil Douglas regime, which challenged the validity of his 2010 election victory, over his possession of a green card.

Following the 2010 election, the Labour party’s candidate for Constituency #8, Cedric Liburd argued that the Honourable Eugene Hamilton was a citizen of the United States. Mr. Hamilton immediately rejected this charge, and clarified that he only held a U.S. Green Card.

After their first attempt in the High Court was dismissed, the claimants took the matter before the Appeals Court of the Organization of Eastern Caribbean States. On Monday, 5th December 2011, the OECS Appeals Court handed down its decision and effectively dismissed the petition appeal brought by then Attorney General Patrice Nisbett and Mr. Liburd, and also awarded costs to Mr. Hamilton.

The Honourable Eugene Hamilton said that Dr. Douglas’ possession of a Diplomatic Passport of another country makes him ineligible to continue serving in Parliament under sections 28 and 31 of the Constitution of St. Christopher and Nevis.

Section 28 (1) (a) of the Constitution, which speaks to disqualifications for representatives and senators, states that “a person shall not be qualified to be elected or appointed as a member if he or she:

(a) is, by virtue of his or her own act, under any acknowledgement of allegiance, obedience or adherence to a foreign power or state.”

Importantly, section 31 states “other circumstances [that] arise” could “cause him or her [a senator or representative] to be disqualified.”

Minister Hamilton stressed that Dr. Douglas’ acquisition of a Diplomatic Passport of another country, subsequent to his election to Parliament in 2015, qualifies as a circumstance “that makes him ineligible to serve any longer in the Parliament in the Federation of St. Kitts and Nevis.”

The minister stated, “When you put yourself up to serve your country as a member of the Parliament, you must understand one thing: your loyalty, your obedience, your adherence must be to your country alone and not to any other foreign power.”

Realizing the constitutional and Parliamentary implications of this significant matter, the Government of St. Kitts and Nevis has sought legal advice on the way forward.