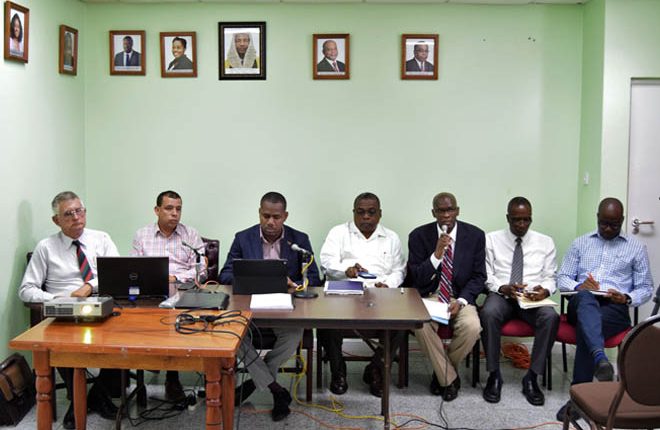 Ministry of Education updates nation on progress of new BHS

(SKNIS): The Ministry of Education along with the Ministry of Public Infrastructure and technical experts held a press conference today (July 20) at Government Headquarters to update the nation and the media about the progress and concerns surrounding the construction of the new Basseterre High School (BHS) at Pond’s Extension in East Basseterre.

“The government takes its responsibility to address all concerns raised by the public to be of utmost importance as we remain accountable to the people of St. Kitts and Nevis. More importantly the safety of our citizens is of priority to this Team Unity Administration,” said the Deputy Prime Minister and Minister of Education, Honourable Shawn Richards, noting that he has kept his promise he made during a recent sitting of Parliament to hold several different public forums to speak to the concerns.

It was said by the minister that prior to taking office, the Government of National Unity made what he describes as a “landmark decision” to construct a new facility to house the new BHS.

The deputy prime minister recalled that the permanent closure of the old BHS on Victoria Road resulted in the relocation of the school, students and faculty.

At the start of the new school term, in January 2016, the students began occupying newly constructed wooden buildings built specifically to accommodate the over 850 students and some 80 teachers. The buildings were constructed by the Barbados based company Innotech Services Limited.

The Government of National Unity subsequently established a number of working committees to spearhead the preliminary task in the process of constructing the new BHS, said the deputy prime minister, adding that one such committee was the SKN Water Working Group, which was assigned the task of selecting the site on which to build the new Basseterre High School.

After the various sites were identified, another committee was established to study the water as two of the sites identified were near the Basseterre aquifer.

“Subsequently, the Cabinet of the Federal Government approved the site of the New Basseterre High School at Ponds Extension in East Basseterre. The size of the parcel of land designated for building the new BHS is approximately 14 acres,” said Minister Richards.

Following this decision, Cabinet ordered the formation of the steering committee for the construction of the new school.

“The terms of reference were prepared in quick time by the steering committee and submitted to Innotech who has prepared the preliminary drawing of the proposed new Basseterre High School,” said the minister. “Shortly thereafter a boundary and topographical survey of the site was undertaken by the Department of Land and Surveys.”

Minister Richards informed that the costing to construct the new Basseterre High School is being worked on.

The minister said that in the interim there has been much public debate about any adverse effects of the new Basseterre High School on the aquifer. He assured that all of the necessary steps are being taken to ensure that there is satisfaction with the end product.