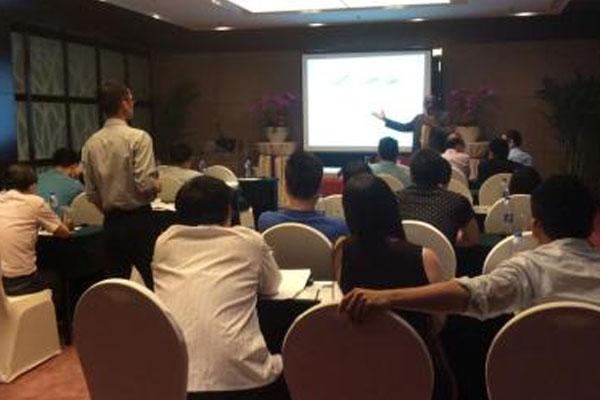 Brades, Montserrat — Following an invitation via China’s commercial attaché based in Antigua, a team from the Montserrat Development Corporation (MDC) visited China last month to attend the 18th annual China International Fair for Investment and Trade (CIFIT) in Xiamen, China.

Professor Lei Meng, who was the MDC liaison for the trade mission and accompanied the team during the visit, had undertaken a great deal of preparation work prior to the arrival of the team. This work included having the corporation’s investment briefs translated into Mandarin and printed for distribution at the booth, having both the “Doing Business in Montserrat” guide and “Invest Montserrat” booklets translated into Mandarin and placed onto the Invest Montserrat website and setting up meetings with interested parties.

The Fair opened on September 8 and the MDC booth was well positioned next door to the Australian visa booth so there was good foot traffic in the area. The fair had over 500 exhibitors including a number of other investment agencies exhibiting mainly from the African continent.

The only other Caribbean presence that was seen at the Fair was from the Bahamas Tourism Department which has recently opened an office in Beijing to facilitate Chinese tourists going to visit the huge Chinese hotel investment known as Baha Mar which has four large hotels and casinos.

A steady stream of persons came into the booth to learn about Montserrat and the MDC; however, 90% of the queries related to whether or not Montserrat had a citizenship by investment programme in place, as a large number of affluent Chinese are looking for a second passport or visas with special conditions.

Apart from the Caribbean islands around Montserrat that are offering such an inducement to foreign nationals, the following European countries all had booths at the Fair highlighting their citizenship by investment programmes: Hungary, Cyprus, Malta, Greece, Spain and Portugal. In addition to these countries, Australia and the USA both had booths pushing their visas in return for investment programmes.

The team has the contact details of a number of persons that visited the booth and requested additional information and responses to such requests have already been actioned. MDC chairman, John Ryan, and chief executive, Ivan Browne, with Meng as interpreter, also held a number of one to one meetings with 14 potential investors during an ‘investor matchmaking’ session at the Fair

Following the team’s return to Shanghai, an investment presentation was made to 20 wealthy individuals and companies with the primary focus being on investment opportunities, particularly in the real estate area.

The presentation was led off by cabinet secretary, Angela Greenaway, who spoke on behalf of the government and outlined the various incentives available to investors. Browne then spoke of the history of the island and the facilities and attractions present and planned for tourists and Ryan closed the presentation after outlining the various options available within the real estate sphere.

The presentation was followed by an animated question and answer session. The contact details of all those attending have been duly noted so that the appropriate follow up can be undertaken.

Since the team’s return to Montserrat a number of queries have been received concerning the port and hotel investment opportunities.