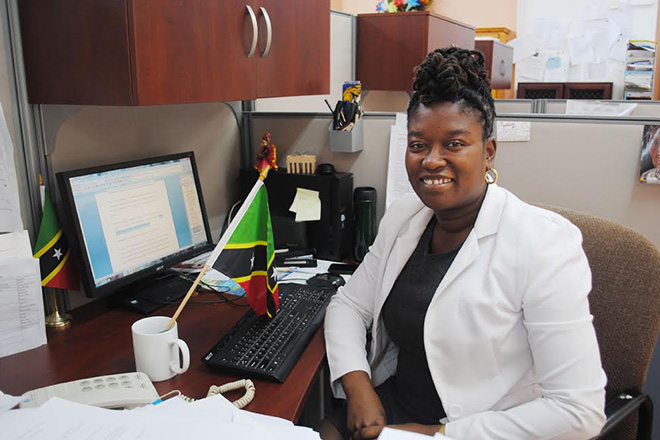 BASSETERRE, ST. KITTS — When the former Labour-led Federal Government of St. Kitts and Nevis decided to open an embassy in Cuba last year, a young multilingual female Foreign Service Officer in the Ministry of Foreign Affairs was despatched to Havana to set up the new embassy.

The Foreign Service Officer travelled to Havana, Cuba, in March 2014 and was on the ground for a period of two weeks. During that time she negotiated with the Government of Cuba to determine the best way forward for the Government, and looked for suitable office space and residential accommodation for the St. Kitts and Nevis Ambassador.

The embassy was opened in June 2014 and the same Foreign Service Officer was part of the St. Kitts and Nevis delegation that was led by the then Prime Minister, the Rt Hon Dr Denzil Douglas, and included the then Foreign Affairs Minister, the Hon Patrice Nisbett, Director of Foreign Affairs (now acting Permanent Secretary) Ms Kaye Bass, and the Ambassador-designate at the time, His Excellency Kenneth Douglas.

When on Wednesday May 27th this year, at his monthly press conference, Prime Minister the Hon Dr Timothy Harris announced that Ms Verna Morris, a career diplomat had been assigned to Cuba as Chargé d’affaires at the Federation’s embassy in Havana, many were those who were quick to ask – ‘Verna Morris who?’

Ms Morris did a great job when she went to Cuba, and therefore her new posting is taking her back to familiar grounds to perform a familiar job. Having earned her first degree in Cuba, she is fluent in Spanish. She also speaks French (intermediate level), and German (beginner level).

Ms Morris was born in Basseterre and grew up in Tabernacle. She attended the then Tabernacle All Age School (now Edgar T. Morris Primary School), Cayon High School, and the Clarence Fitzroy Bryant College (CFBC).

On her return from Cuba, her first job in October 2005 was as a Documentalist at the St. Christopher Heritage Society where she worked for just one month, before joining the Foreign Affairs Ministry as an Assistant Secretary, the position given to all holders of a first degree at that time.

The nomenclature title of ‘Assistant Secretary’ was changed a few years ago by Prime Minister the Hon Dr Timothy Harris, when he was the Minister of Foreign Affairs, to ‘Foreign Service Officer’ in line with titles used in international relations in most countries of the world.

Ms Verna Morris served on the Latin America Desk, and among her duties were to monitor and to advise on global and regional events, and initiatives that can impact the foreign policy of St. Kitts and Nevis. In her position she also identified opportunities for St. Kitts and Nevis to strengthen its bilateral and multilateral relations.

She also assisted with public relations programmes to enhance the image of the Ministry; assisted in Protocol and Ceremonial activities, and provided translation of Spanish and French documents.

Among her professional accomplishments as a Foreign Service Officer include the drafting of speeches on Latin America related issues which were delivered by the Minister of Foreign Affairs and the Prime Minister; represented the Government in regional and international meetings and negotiated the texts of Declarations and other outcome documents.

She also attended trainings and seminars in several countries including the Republic of China on Taiwan, Mexico, Chile, Argentina, Germany and locally.

The spearheading of the operation which resulted in the establishment of the Embassy of St. Kitts and Nevis in Havana, Cuba, is probably the most colourful feather in her professional cap as a Foreign Service Officer.

Following the recent announcement of her posting, Ms Morris left the Federation last week and travelled to Cuba. She is expected to begin her duties as Chargé d’affaires at the St. Kitts Nevis Embassy in Havana shortly after Ambassador Kenneth Douglas demits office.

Ms Morris is well known in her community, being an active member of the Methodist Church in Tabernacle Village.