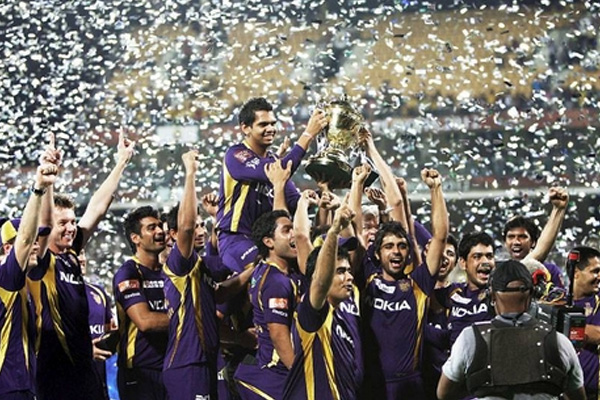 Chasing 200 for victory at the M Chinnaswamy Stadium, KKR reached their target with three balls to spare when tail-ender Piyush Chawla sliced a delivery from seamer Parvinder Awana over point for four, triggering mass celebrations.

The triumph added to their success in 2012 when they captured their first ever title by beating Chenna Super Kings in the final.

KKR were lifted by 94 from Manish Pandey who counted seven fours and half-dozen sixes off 50 deliveries while Yusuf Pathan cracked four sixes in a breezy 36 from 22 balls.

However, KKR started the last over needing five runs for victory, with Narine on strike. He was held scoreless from the first ball before scrambling a single off the second ball to give Chawla the strike.

“I just wanted to make contact and give it to Piyush,” said Narine afterwards.

The Trinidad and Tobago off-spinner had earlier come in for some rough treatment as Kings XI recovered from a weak start to make 199 for four from their 20 overs, after being sent in.

He bowled Australian George Bailey behind his back for one with his first ball of the game in the sixth over of the innings that cost just two runs.

Narine was immediately pulled from the innings and when he was recalled in the 14th over, he leaked runs. His next three overs cost 44 runs as he finished with one for 46 from his four overs.

Wicketkeeper Wriddhiman Saha slammed an unbeaten 115 from 54 balls, counting ten fours and eight sixes, while Manan Vohra chipped in with 67 from 52 balls.

The pair shared a stand of 129 for the third wicket that gave the innings momentum.

Narine controversially opted to remain in India for the IPL final instead of returning to the Caribbean for an ongoing training camp in preparation for a three-Test series against New Zealand which starts next Sunday.

He was subsequently ruled ineligible for selection.