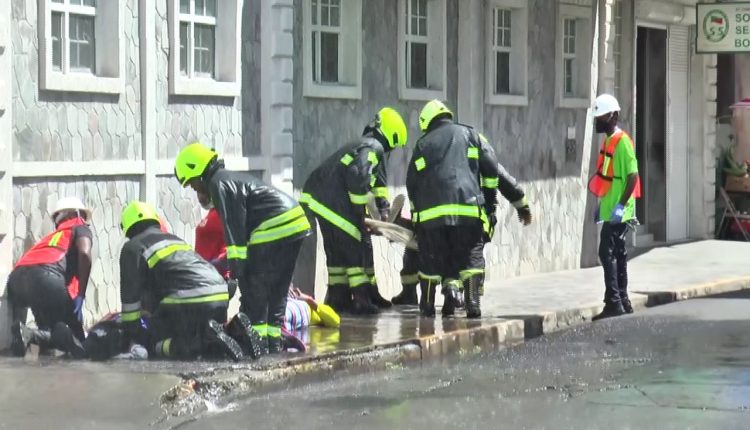 The exercise began with the activation of the early flood warning device in lower St. Peters and headed down College Street and West Bourne Ghaut.

Disaster Coordinator at the St. Kitts-Nevis Red Cross Society, Telca Wallace explained the purpose of hosting the exercise, noting that it aims to test the capacities of recently trained response teams.

The exercise was carried out during the hours of 9.00 a.m. and 12 pm and saw members of the Fire and Rescue Services, the St. Kitts Nevis Defense Force and the Royal St. Christopher and Nevis Police Force sprinting into action. There was also members of the public pretending to be survivors during the orchestrated flooding disaster.

Water damaged vehicles that were carried down to the sea by intense flooding helped to enhance the scene and drew much attention from passers-by.

The exercise was also used to test several capacities at the national level including the Flood Hazard Warning System at Lower Monkey Hill and the Basseterre Ferry Terminal, Traffic Department and NEMA Volunteers from Districts 1 and 2.

The Simulation Exercise forms part of the SKNRCS Training Interventions funded under the
Capacity Building Initiative (CBI) for Disaster Preparedness and Response for National Societies within the Caribbean.