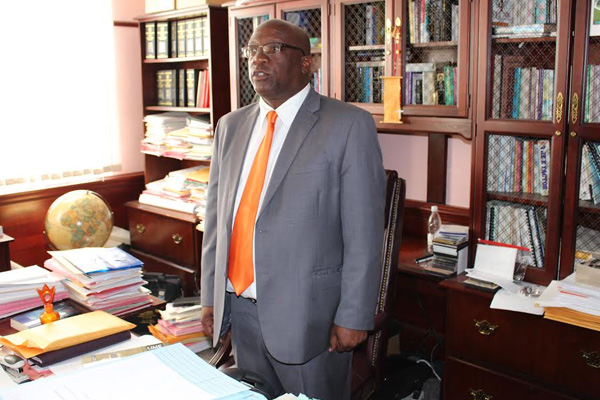 Basseterre, St. Kitts (SKNIS) — The new Prime Minister of St. Kitts and Nevis, the Honourable Dr. Timothy Harris described his taking up his offices at Government Headquarters, Basseterre, as a moment of “celebration and humility.”

He emphasized that the celebration came about due to the will of nationals of St. Kitts and Nevis.

“Celebration in that this is a people’s government, a government elected in general elections, though … it has revealed the voice of the people,” Prime Minister Harris emphasized. “And we always had contended that the people wanted change. Ultimately, the people delivered that in an overwhelming way.”

“We have an agenda which is people centred and we want the transition to be smooth and quick, so that we could begin immediately to do that,” the Prime Minister noted. “And that is why the first day after having been Sworn In, we have come to the Government Headquarters, the centre and focal point of all governmental activities to ensure that we could begin the process of transition and ensure that the people’s agenda is executed.”

Prime Minister Harris also noted his longstanding relationship with his colleagues in the Caribbean Region. He added that as would have already been reported by the media, he had discussions with several heads of state, specifically Prime Minister Ralph Gonsalves of St. Vincent and the Grenadines, Prime Minster Roosvelt Skerritt of Dominica and Prime Minister Keith Mitchell of Grenada prior to his official Swearing In as the third Prime Minister of St. Kitts and Nevis.

The new Prime Minister further assured that his government would work with all entities both locally and regionally.

“We will sustain our relationship with …those opposition groups that have provided very strong support to us throughout all of this.” Prime Minister Harris assured. “In other words we will have a memory of gratitude to all while at the same time recognizing that we have to work with governments and we need the necessary colleagiality among ourselves to get the work done at the regional level. So we certainly will get on with the job both domestically and in the region, working in a cooperative manner.”