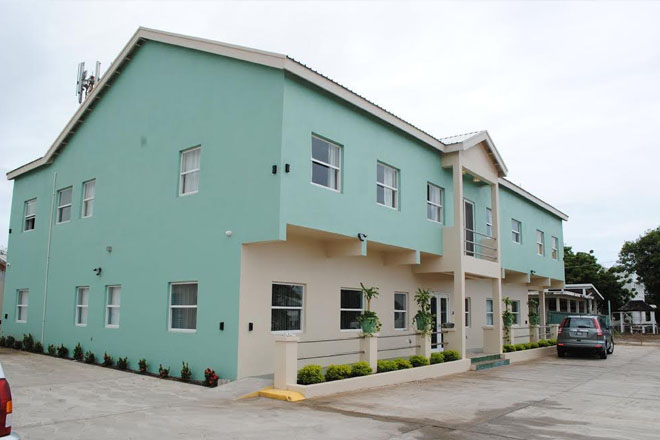 A simple but significant blessing ceremony of the new building was conducted by Rev Canon Valentine Hodge, which marked a symbolic achievement for the hard working staff of this public organisation that operated out of a rented location at the corner of Central Street and New Street in Basseterre for over 15 years.

However, according to Solid Waste Management Corporation’s General Manager Mr Alphonso Bridgewater, an elaborate official opening ceremony of the new building is slated for Thursday July 2. The ceremony will be held under the distinguished patronage of the Governor General His Excellency Tapley Seaton, CVO, QC.

The ceremony starts at 8:30 am with entertainment from the Zion Moravian Church Choir, the Beach Allen Primary School, staff of the Solid Waste Management Corporation, and a special presentation. The invocation will be done by the Rev Hilton Joseph the Superintendent of Moravian Churches, St. Kitts Conference.

Overview of the construction of the building will be done by Jenkins Company Limited who was the contractor for the building, and a presentation will be given by Ms Arlene Edwards who works for Williams Architectural but was the Design Consultant for the new building.

The General Manager will make a presentation which will provide a perspective and the journey from hence to where they are in terms of the new building, following which the Hon Eugene Hamilton will deliver an address and in delivering the address also formally declare the building open.

“The cutting of the ribbon will be done, and people will be invited and encouraged to come inside and see the various offices and what is on offer inside the building itself,” said Mr Bridgewater. “Once they reach to the second level where the conference room is, we will have the launching of the website for the Solid Waste Management Corporation.”

Also invited are neighbours in terms of individual households, the Evangelical Church immediately to the north-west of the building, the Moravian Church, the Seventh Day Adventist Church Minister residing literally next door; other residents, principals and occupants of agencies and institutions located in the neighbourhood including, the Olympic Committee, and the Brimstone Hill Fortress Basseterre office.

“Solid Waste Management Corporation prides itself very much in what we call social capital,” said Mr Bridgewater. “For me there is capital in terms of money. This is what I refer to as ‘social capital’ as demonstrated in the moral support and encouragement provided by significant proportions of the public at challenging and critical times in the evolution of the Solid Waste Management Corporation.”

All those persons and more have been invited, and he added that they would be reaching out to former members of staff. While the entire operations cannot be closed for the entire day, every department and every unit of Solid Waste will be represented at the opening.

“In essence, what people would be experiencing when we come here, in my view, will be a significant milestone,” said the General Manager. “It also will be a reflection of a steady mind-set of a number of people who persisted despite the odds and the challenges, and at the end of the day this whole heritage, the whole legacy would provide in my view, a sustained multiplier effect for the momentum in motivation and the mission of Solid Waste Management Corporation going forward.”

Mr Bridgewater noted that the organisation is guided by philosophical signposts, and that last year they held a General Assembly where they were ‘looking inwards’. “After looking inwards last year, we are now reaching outwards for 2015 which allows our customers to come into a more welcoming environment, as we project for the future.”

The ceremony, confirmed the General Manager, won’t go beyond mid-day, and refreshments will be served thereafter.