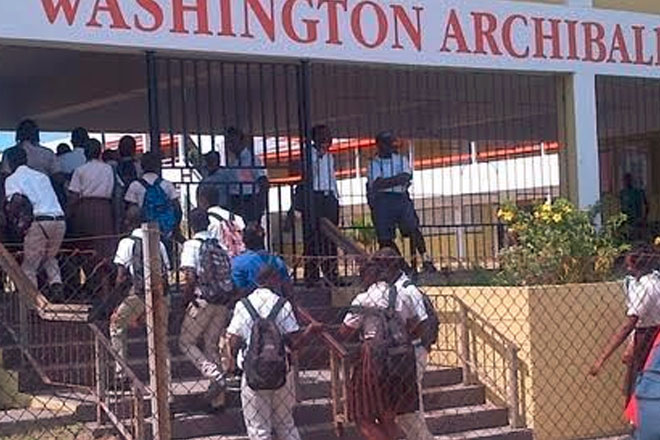 Basseterre, St. Kitts — Deputy Prime Minister and Minister of Education, the Hon. Shawn Richards, said the new Government of National Unity will not move the students and teachers back to the old Basseterre High School (BHS) campus that has been beset with environmental health problems for many years.

He also reported that in the short term government will end the “shift system” with the Washington Archibald High School (WAHS) and instead make temporary arrangements for students and teachers to resume normal school hours, whilst plans are put in place to build a modern BHS.

In a national broadcast on ZIZ Radio and TV yesterday afternoon, Minister Richards first provided a brief history of the problem. “Most of us are aware that the Basseterre High School campus was closed for the last two school terms after prolonged complaints of various illnesses by staff and students which many believed to be as a result of problems at the school.”

The Education Minister said that despite extensive and repeated efforts by several reputable, regional and international environmental health and safety research and testing agencies, there is still no certainty as to the cause of the illnesses that have afflicted students and teachers at BHS over the years. “Several reputable agencies such as the Caribbean Public Health Agency (CARPHA), the Caribbean Industrial Research Institute (CARIRI), International Labour Organisation (ILO) and Pan American Health Organisation (PAHO), inspected and performed tests at the school. These agencies did not find any sole causative factor but reported that the health problems seemed to be related to the school environment and were multifactorial in nature. The former Government attempted to rectify the issues. However, the health issues continued unabated.”

He said that Cabinet had been “consulting with stakeholders at every step of the way to arrive at a consensus” and emphasized a preferred, precautionary approach. “Hence, all of the reports have so far been inconclusive as to the reason behind the many illnesses and problems encountered by the staff and students of the Basseterre High School. The Government of National Unity has decided that it would err on the side of caution.” Minister Richards highlighted a clear policy difference between Team Unity and the previous administration. “The health and wellbeing of students and staff at the BHS are of paramount importance to us. We will build a new school. It is not the intention of this government to continue to put the health of these citizens of St. Kitts and Nevis at risk.”

Minister Richards spoke to the unpopularity of the shift system introduced by the previous administration and the decision of the Team Unity administration to end it. “Some students attended school in the morning and the others in the evening. This shift system presented numerous challenges. Noteworthy is the reduction of teacher to student contact time, decreased participation in extra curricular activities, and growing concerns by parents of their limited supervision of children. Therefore, it is the aim of this Government to bring an end to the shift system.” The shift system provided for BHS and Washington Archibald High School (WAHS) students and teachers to share the WAHS premises on a rotation basis.

The Education Minister outlined plans to improve the temporary schooling arrangements in the interim, until a new school is built. He said that for the first term of the new school year, beginning September 2015, BHS students and teachers will use temporary facilities within a small radius of the WAHS. For the second term, the Government will “build three (3) new building blocks with six (6) classrooms in each building at a temporary site. These buildings will be a hybrid of the modular and wooden type and are budgeted at a cost of 3.3 million EC dollars.The work on the structures are expected to take fifteen (15) weeks. Hence, these new spaces should be fully ready for occupation for the second school term which commences January 4th, 2016.”

The Education Minister thanked all the stakeholders for their assistance and patience as the new Team Unity government endeavors to bring about a “permanent solution” to the situation at the BHS.