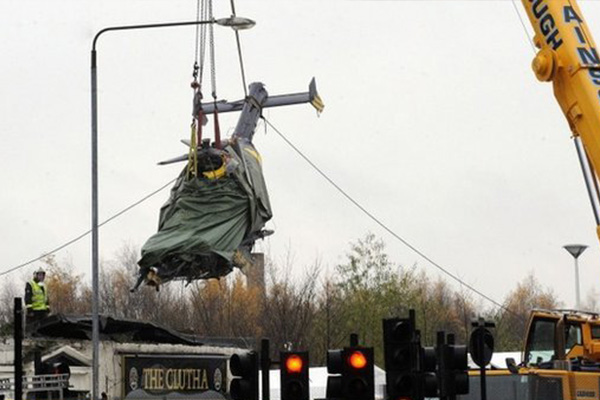 (BBC)–No mayday call was made from the police helicopter that crashed into a busy Glasgow pub, killing nine people.

Air accident investigators said the helicopter had made a “vertical descent” before it struck The Clutha at 22:25 on Friday.

Rescue teams have now removed the wreckage of the aircraft from the scene and a full search is under way.

The three helicopter crew died in the incident, along with six people inside the pub. Six victims have been named.

Samuel McGhee, 56, of Glasgow, and 48-year-old Gary Arthur, from Paisley, Renfrewshire, had both been inside the pub.

Mark O’Prey has been named locally as another victim who had been inside the pub.

Earlier, his family had expressed frustration at the amount of information they had been given about the recovery operation.

NHS Greater Glasgow and Clyde medical director, Dr Jennifer Armstrong, said that 12 of the 32 people who were injured in the crash were still in hospital.