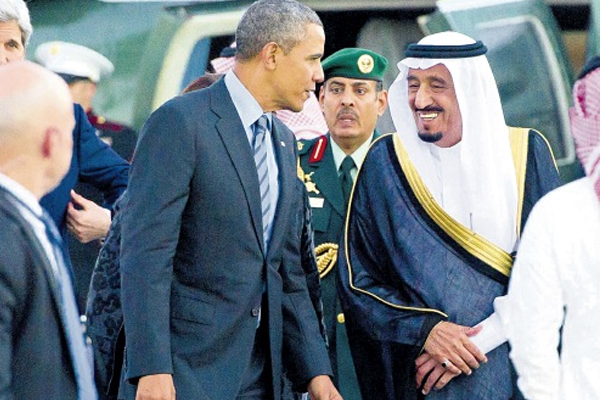 Riyadh, Saudi Arabia (AFP) — US President Barack Obama landed in Saudi Arabia on Tuesday to shore up ties with new King Salman and offer condolences after the death of his predecessor Abdullah.

Air Force One touched down at King Khalid International Airport in the capital Riyadh, arriving from India where Obama cut short a state visit to travel to the ultra-conservative Muslim kingdom, a key US ally.

Saudi television showed Salman welcoming Obama and his wife Michelle at the bottom of a red-carpeted ramp before a military band played the US and Saudi national anthems.

A row of stars and stripes flags flew beside Saudi Arabia’s green standards.

Oil Minister Ali al-Naimi was also among the welcoming delegation.