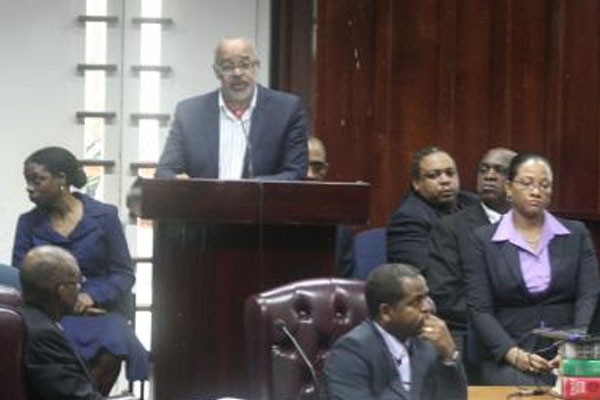 Castries, St Lucia — A “SWAT” (special weapons and tactics) team is being considered in order to respond swiftly to any suspected case of Ebola in the Organisation of Eastern Caribbean States (OECS) region should the need arise.

This was one of the proactive approaches outlined by the OECS Commission as the Director General Dr Didacus Jules addressed a joint sitting of Saint Lucia’s parliament on Thursday, October 23, 2014.

The urgent event was the first address by the OECS Commission to any joint meeting of parliament in the region in recent memory.

The joint meeting of Saint Lucia’s parliament heard from the OECS Commission on the region’s position regarding the threatening Ebola virus. This follows talks among health officials at the inaugural OECS Council of Ministers of Health meeting, which took place recently in St Vincent and the Grenadines and a special Havana summit meeting of members of the regional organisation ALBA.

The OECS Commission used the opportunity to advise member states on the need to finalise their leadership teams for a technical preparatory meeting in Havana on October 29, 2014.

The director general also spoke to the importance of managing public perception of Ebola, as well as initial plans for securing specific levels of support from development partners.

The head of the OECS Commission HIV/AIDS Programme Unit Dr James St Catherine accompanied and shared in the presentation by the OECS director general.

The joint sitting of Saint Lucia’s parliament also reiterated the need for householders, business houses and other places of social activity to apply basic hygiene practices such as the washing of hands in the ongoing battle against disease.