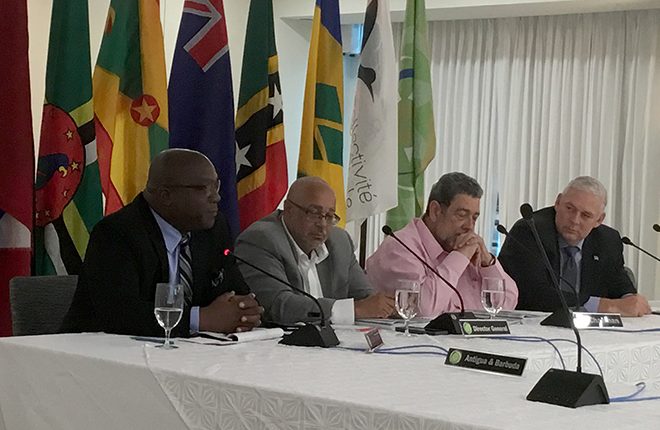 (Press Unit in the Office of the Prime Minister) – Heads of Government of countries within the Organization of Eastern Caribbean States (OECS) have openly welcomed a deeper working relationship with the Government of Barbados, particularly on the matter of furthering the agenda of the free movement of people.

“I think it was refreshing to find, in the Prime Minister of Barbados, a new partner; a new partner in the context of the CSME [CARICOM Single Market and Economy] agenda, which Barbados would provide leadership to,” Prime Minister of St. Kitts and Nevis, Dr. the Honourable Timothy Harris, said during a media briefing following the conclusion of the 65th Meeting of the OECS Authority in St. Lucia on Tuesday (June 19).

Barbados’ Prime Minister, the Honourable Mia Mottley, was invited by the Heads of Government to the two-day OECS Authority meeting. There, Prime Minister Mottley commended the institution for its maturity, and noted that the challenges of Barbados and that of the OECS sub-region are common and similar in nature.

The St. Kitts and Nevis Prime Minister said that Barbados has long been an advocate for the free movement of people throughout the region. Dr. Harris added that Barbados’ involvement can be traced back to the leadership of former Prime Minister, Owen Arthur, who he said “inspired a lot of us in terms of his leadership of that particular agenda within the CARICOM context.”

“So we hope to see better deepening and perhaps widening of the functional cooperation with Barbados and we look to see that on a plethora that are there before us that we could find some harmonized framework between Barbados and the OECS countries,” Prime Minister Harris said.

The two-day meeting was held under the chairmanship of the Prime Minister of St. Vincent and the Grenadines, the Honourable Dr. Ralph Gonsalves.