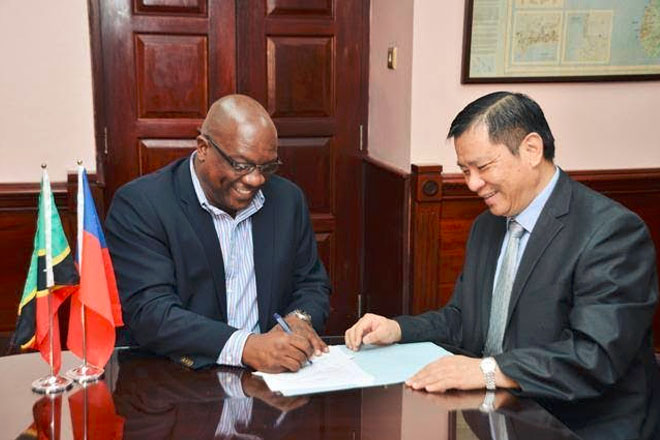 Basseterre, St. Kitts (SKNIS) — A fresh coat of paint, the addition of amenities for employees and visitors and other renovations are expected to increase worker morale and productivity in Government Headquarters in St. Kitts.

A project which began last year has seen the upgrading of offices and bathrooms as well as the redesign and outfitting of a cafeteria. Work has been ongoing and plans have been developed to expand the improvement project.

“One worker, who has been employed in the building for more than 15 years said: “I think it is a good idea. After a while you have to make some changes and upgrade the facilities and I welcome this project.” Another shared similar sentiments and suggested that workers will be more comfortable and this should translate into improved productivity.

The project has drawn support from the oldest diplomatically of St. Kitts and Nevis. The Republic of China (Taiwan) recently made a donation towards the expansion of the project as part of its commitment to mutual cooperation. The presentation was made by Taiwanese Ambassador His Excellency George Gow Wei Chiou who is based in the capital city, Basseterre.

Prime Minister Dr. the Honourable Timothy Harris accepted the donation and highlighted the strong bonds of friendship that exists between the two countries. He stressed that the building is in need of a facelift and assured that the monies will add value to the ongoing initiatives.