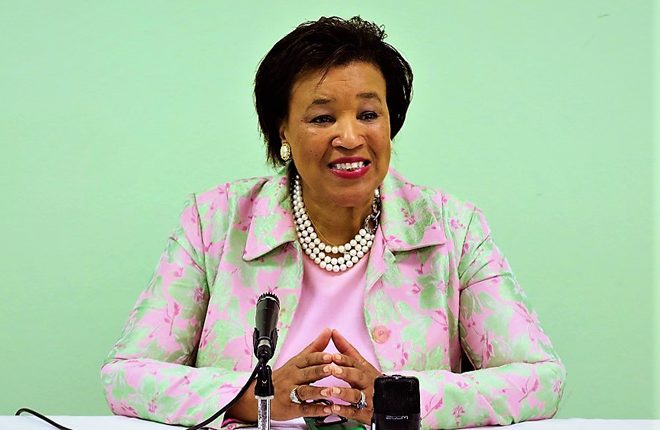 (SKNIS): At a press briefing at Government Headquarters in St. Kitts on May 02, Commonwealth Secretary-General, the Right Honourable Patricia Scotland Q.C., announced that the Commonwealth Secretariat now has an Innovation Hub, which she launched on the opening day (16th April) of the 2018 Caribbean Heads of Government Meeting (CHOGM) in London. She is encouraging residents and citizens of St. Kitts and Nevis to make the most of the Innovation Hub.

“I would like to see the innovators of Nevis, the innovators of St. Kitts, both going on to that website and telling us what you are creating. We know that there is real innovation in our region and we want it to be shared with everybody, and St. Kitts and Nevis has brilliance and beauty,” she said.

She encouraged citizens and residents of the twin island Federation to check out the website to see what is has to offer and to stay updated with what the Commonwealth is doing.

The Innovation Hub has five facets. The ‘display’ space showcases ideas and innovation stories from all across the Commonwealth. The ‘data’ portal is a repository of Commonwealth information and knowledge resources and includes thousands of publications. The ‘delivery’ space is the Commonwealth’s digital showroom from where anyone can download, read and use the knowledge products and toolkits created by the Secretariat. And the ‘discovery’ space is an innovation lab for incubating new ideas and accelerating innovations with maximum social impact.

Secretary-General Scotland, when she was inaugurated on 1st April, 2016, promised to put both “common” and “wealth” back into the Commonwealth. This, she says, includes the wealth of the common ideas and innovations from 53 member states, 87 organisations of the family and 2.4 billion people of the Commonwealth.

The Commonwealth Secretary-General is currently on a tour of the Caribbean where she is holding broad-based discussions with leaders on how the Commonwealth can assist climate vulnerable countries in minimizing the impact of extreme weather events, among other relevant issues.