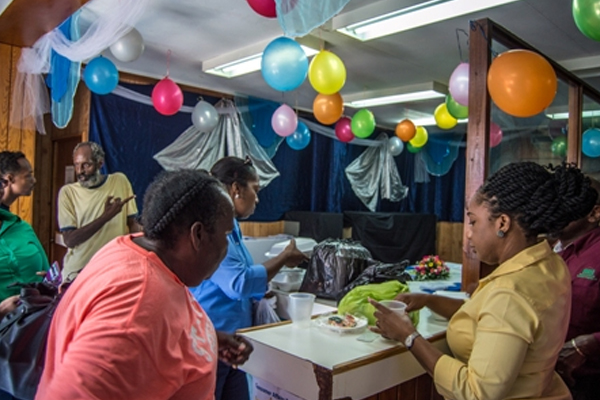 The observance took place at the Consumer Affairs Department on Church Street under the watch of Director of Consumer Affairs, Paul Queeley who stated that the main purpose of the event was to highlight the function of the department, how it protects the consumers in the marketplace and to give residents good tips on how to be wise consumers.

“World Consumer Rights Day started in 1983 by Consumer International, which is the global voice for consumers, and was set up to bring about discussions on legislation that will protect consumers. The topics of discussion can be anything from cost of cell phone usage to food consumption. This year the focus is on how we can make healthy food more affordable to the consumers,” commented Director, Queeley.

During the Open House, numerous persons visited the Consumer Affairs Department where healthy meals, drinks and pamphlets on consumer tips for the purchasing of healthy foods and other basic items were available for the spectators.

One visitor, Janice Kelley of Boyd’s Village, said “the Open Day event is a very important move by the Consumer Affairs Department in an effort, to give residents advice on purchasing healthy food choices.”

In addition to the Open Day event, other initiatives celebrating the week of activities from Sunday, March 15 to Friday, March 20th were: a church service held at the Antioch Baptist Church in Basseterre, a radio program on ZIZ radio, a consumer affairs appreciation service at Port Zante and a consumer information program and giveaway on WINN FM radio.

World Consumer Rights Day is held annually on March 15th to commemorate an historic address by former United States President, John F. Kennedy, which outlined the definition of consumer rights for the first time by a World leader.