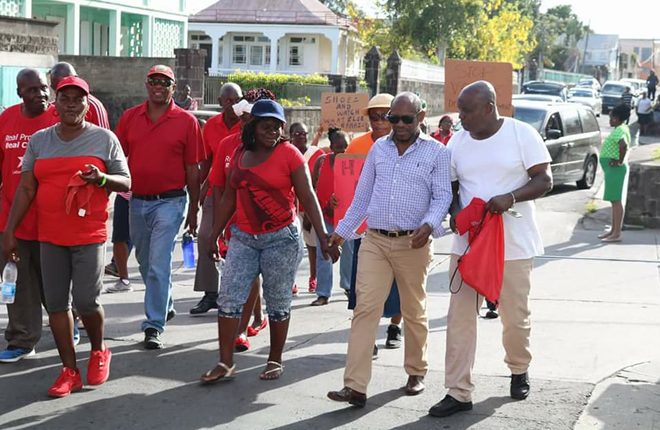 Opposition out of sync with the popular sentiment of the people, says Prime Minister Harris

(Press Unit in the Office of the Prime Minister) – Prime Minister, Dr. the Honourable Timothy Harris, is again calling into question the integrity and level-headedness of Leader of the Opposition, Dr. Denzil Douglas, and members of the St. Kitts and Nevis Labour Party who have been leading a minuscule group of supporters in the call for the prime minister’s resignation.

Responding to a question posed during Wednesday’s (May 30) press conference in reference to a poorly attended protest march held last Friday (May 25), Prime Minister Harris said clearly the Labour Party, under its current leadership, is a party that is waning in popularity, adding, “when you count on your fingers in terms of impact, the march was a failure.”

Prime Minister Harris noted that the unsuccessful march by the Opposition is further evidence that the credibility of Dr. Douglas remains highly questionable in the eyes of the ordinary men and women of St. Kitts and Nevis, as one only has to look at his character and past transgressions during his tenure as prime minister.

“That is a man who one judge told us already is a stranger to the truth. That is a man who refused to resign when his actions led to the FinCEN Advisory of May 2014 and led us to lose our visa-free access to Canada in 2014, and what were the allegations put forward by credible entities – was that he had allowed illicit actors to participate in our [Citizenship by Investment] programme,” Dr. Harris said.

The prime minister continued, “We know that the man who is leading the charge is the very man who had benefited to the tune of $3 million on the property at Five Ways who he leased to the Taiwanese officials. That is a man who had never explained what duty free concessions were provided to numerous properties that he had beneficial and legal interest in, and presided over the Cabinet with respect to duty free concessions for them.”

Dr. Harris said the same can be said of Opposition member, Marcella Liburd, who he said benefited from millions of dollars paid to her law firm while she served as a member of Cabinet.

“Marcella Liburd has never denied and I have put this time and time again to her in Parliament that the legal firm of which she is a partner, Bryant and Liburd, has benefited from the exclusive nature of its relationship with the Development Bank to the tune of about $4 million. So while she was a minister, the law practice was being enriched and that is the nature of what we are dealing with.”

Prime Minister Harris said he is happy that the majority of the people of St. Kitts and Nevis are able to see beyond the noise and mischief being created by the Opposition and stated that he will not be distracted from carrying out the work on behalf of the people.