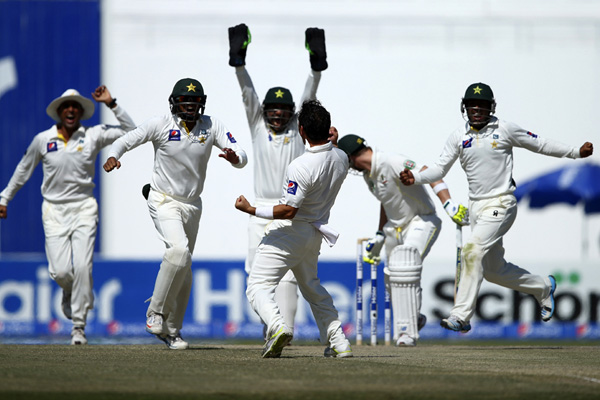 Twenty years of Pakistan defeats at Australian hands were erased in little more than 20 minutes. The last five wickets belonging to Michael Clarke’s befuddled team tumbled for eight runs in 46 balls after lunch, rather summing up the gulf between the two sides in a series Australia had expected to win.

Instead it was Misbah-ul-Haq’s team that was triumphant, not just beating Australia but totally obliterating them. The Abu Dhabi result was Pakistan’s biggest ever victory margin by runs. In terms of average differential (batting average minus bowling average) this was Australia’s worst series of all time. Australia has the Ashes, but that’s all.

The final spoils were rightly shared by Zulfiqar Babar and Yasir Shah, the little-known spin duo which did not merely cover for Saeed Ajmal’s absence but took advantage of it. Australia spent most of the preceding six months preparing for mystery off spin and doosras, even hiring Muttiah Muralitharan. Instead they were flummoxed by classical left-arm orthodox and legspin.