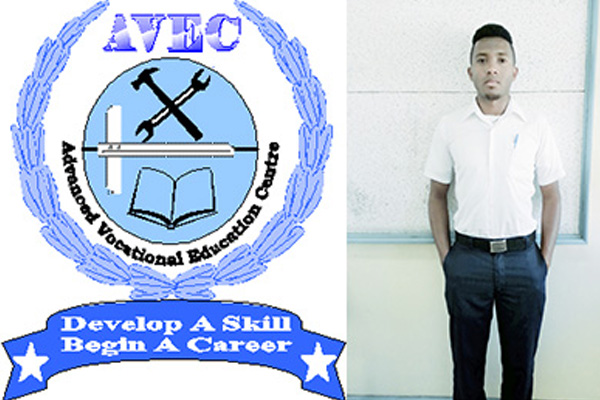 Past AVEC Student Credits School for his jump start

Liddie, a former hospitality student who specialised in Hotel Management, has accomplished much since his tenure there and credits all the opportunities he has been given thus far to the advanced learning institution.

In an interview with SKNIS, Liddie revealed he had dropped out of high school due to financial constraints but did not let the setback deter him from his goals.

He shared that he always wanted to be a doctor but used the opportunity at AVEC to go into hospitality as a way to advance in life.

“I like it,” he said. “Interacting with people and customers is one of the areas I actually love as it brings out my personality because I like to make people smile and I laugh a lot. Why not put that attribute to work instead of keeping it all to myself?”

He is currently employed at Carambola Beach Club as a main server where he receives rave reviews.

“My managers and customers love me,” he humbly said, and stated that he has been recommended to serve returning guests, top officials and VIP patrons. A well known official has even invited him to his home to cook and serve as a butler, all on the recommendation of his manager.

“If there are any other functions or buffets [by this official], I’m also in charge of that.”

Justin also credits what he has learned to his former hospitality teacher Phynora Ible.

“She didn’t give us all theory,” he said. “She gave us hands on training in cheffing, how to speak and handle guests and because I had that experience I was always there to help out in that area. When I graduated AVEC, I won the award for hospitality, English and computer studies.”

Liddie explained why he would recommend that persons attend the advanced institution.

“I would recommend that anyone to go to AVEC especially those who want a fresh start,” he stressed. “If you didn’t do well in high school maybe there were hiccups and the chance for repeating fourth or fifth form is slim, you want to further your education and you don’t have the requirements for the Clarence Fitzroy Bryant College (CFBC). AVEC is that fresh start. I have graduated AVEC and I’m now at CFBC studying hospitality.”

While attending AVEC, he balanced work and studying for his CXC courses in English, mathematics and science. He was able to pass all subjects and moved on to CFBC along with two of this other classmates, Mida Dias and Alisha Gumbs.

Justin is excelling in the hospitality field, but he still has his eyes on entering the medical field and has picked up science courses at the college.

He expressed that working in the hospitality field has provided him the opportunity to interact with people and while working as a butler at an official’s home he was offered a grant to go to Cuba.

“I was dumbfounded when he asked me if I wanted to go to Cuba,” Justin exclaimed. “He said that he saw me struggling and told me that he could help. I am doing afternoon classes at CFBC in Chemistry and Physics so that I can be qualified to go. Opportunities really do come back around.”

Justin stated that even if he does not get to study medicine he can always study his other love, Hotel Management.

“When you are working as a struggling young adult who dropped out of high school it’s always best to keep a positive mind,” Justin noted. “Once people push themselves they can make it happen.”