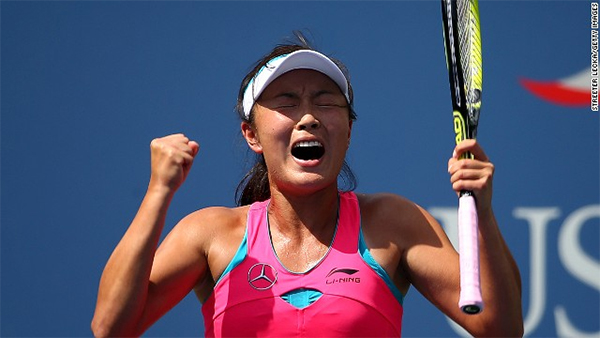 (CNN) — China’s population may be in excess of 1.3 billion inhabitants but only two of its players had ever reached a grand slam semifinal — until Tuesday.

That was when unseeded Peng Shuai put years of frustration, thoughts of retirement and major heart surgery to one side as she blew away Swiss teen Belinda Bencic, 17, at the U.S. Open.

At her 37th grand slam, the 28-year-old was finally into her first semifinals.

The buildup had mainly focused on the young Swiss but it was the little known Chinese — far more recognized as a doubles player — who stole the show with a powerful display.

By so doing, she follows in the footsteps of Li Na, a two-time grand slam winner, and Zheng Jie, who reached semifinals at Wimbledon (2008) and the Australian Open (2010).It’s a little bit too exciting,” Peng said on court after her 6-2 6-1 victory, earning a round of applause after pausing as emotion got the better of her.

“I love tennis, I love to play,” she said

Meanwhile, Serena Williams is in action today Wednesday 3rd September against Italy’s Flavia Pennetta, but she suffered a frustrating day on Tuesday.

Not only did she lose her doubles quarterfinal with sister Venus to Russia pair Ekaterina Makarova and Elena Vesnina, but she also suffered an injury scare.

The world No. 1’s right foot had to be heavily bandaged early in the second set of the 7-6 6-4 defeat.