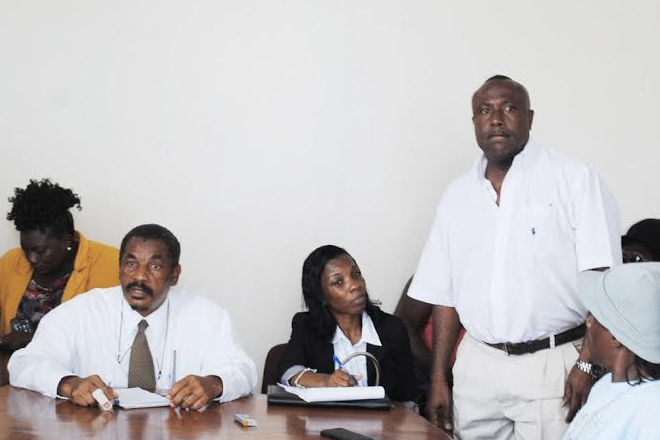 BASSETERRE, ST. KITTS — With only one person coordinating activities of 714 People Employment Programme (PEP) workers under the Parks and Beaches Unit of the Ministry of Health divided into 50 groups around the island of St. Kitts, there was concern about the quality and delivery of supervision.

To remedy the situation, Permanent Secretary in the Office of the Prime Minister Mr Osbert DeSuza announced on Tuesday July 7 that an additional coordinator had been hired, and supervision of the PEP workers will be divided into two roughly equal areas, eastern and western side of the island.

Joining the People Employment Programme (PEP) as the coordinator for PEP supervisors under the Parks and Beaches Unit on the eastern side of the island is Mr William Phillip who reports on duty as from Wednesday July 8.

Previously all the 714 PEP workers and their 50 supervisors were being coordinated by Mr Daniel Henry, coordinator of Parks and Beaches Unit of the Ministry of Health. He also looked after the 130 permanent workers in the Unit, who are paid by the Ministry.

Mr DeSuza made the announcement at a meeting held with the PEP Parks and Beaches supervisors at the Water Services Department Conference Room in Needsmust. Accompanying him were PEP Project Manager Mr Geoffrey Hanley, PEP Assistant Director Mrs Janet Cable, a clerical officer in the Office of the Prime Minister Ms Delcia Blaize, and Mr Daniel Henry.

“The real purpose of the meeting basically is to introduce you to Mr William Phillip, who will be in charge of the supervisors, overseeing the supervisors from Shadwell, New Road, St. Peters, New Town, Bird Rock, Needsmust, and from Conaree right down to Dieppe Bay,” Mr DeSuza told the supervisors. “Mr Daniel Henry will work from Buckley’s to St. Paul’s.”

According to the Permanent Secretary, Mr Phillip is expected to be on the road seeing what is going on, and listening to some of the concerns that the supervisors would express to him. He told them that Government expects nothing but full cooperation from the supervisors who interact with Mr Phillip.

“As you are aware, I think Mr Henry was doing the job for everybody, and we think it was just too much for one person,” explained Mr DeSuza. “So we thought it advisable to increase the quality and the delivery of the supervision, by engaging the services of another person and Mr Phillip was chosen.”

“Please do not encourage that,” pleaded Mr DeSuza. “You are threating yourself when you sign off on time sheets for people who are not working. Mr Phillip will have to basically take his own record, so when we compare what the supervisor sends in to the office with what Mr Phillip presents, we hope that there is no difference and there is no issue that has to be raised.”

He encouraged all of them to extend their full cooperation to Mr Phillip, and invited him to introduce himself to the supervisors.

During question time a number of supervisors raised the issues of their salaries claiming that they were receiving the same amounts as those they were supervising, an issue that brought about some degree of discontentment.

“I appreciate your concern because you should not be supervising a man who is working for the same money like you,” expressed Mr DeSuza. “That creates a problem, and the stress you are undergoing for having to supervise these unruly fellows, I understand some of them are very unruly, probably it is not worth the money the government is paying you.”

He however advised them that the People Employment Programme (PEP) Committee is being restructured and once that is done, it will make certain recommendations to Prime Minister the Hon Dr Timothy Harris, who will then take them to the Cabinet for approval.

“But for now we want you to focus on producing, show discipline, cooperation, and try to see if you can make people change their views of the PEP in relation to some of the field workers that we have,” pleaded Mr DeSuza. “We want people to see that PEP people are working.”