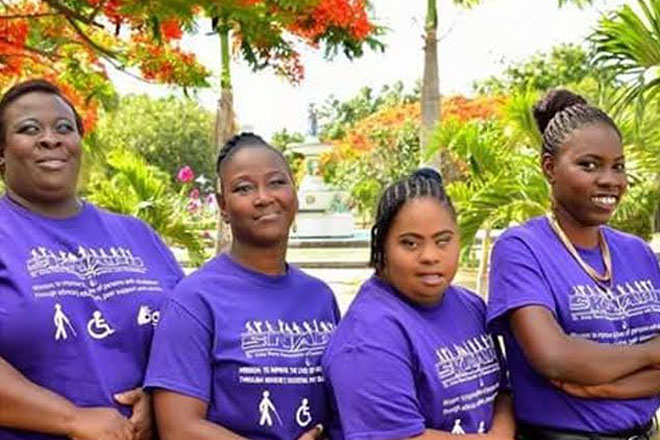 Basseterre, St. Kitts — A facilitator with the People Employment Programme (PEP) sponsored St. Kitts-Nevis Association of Persons with Disabilities (SKNAPD) group based at the McKnight Community Centre, Ms Mary Nurse-Clarke, is reporting that the training they are receiving is helping them in uplifting their self-esteem.

Ms Nurse-Clarke’s proclamation will be put to test tomorrow (Saturday evening September 12th) at the St. Peter’s Community Centre when four young and not so young female members of the PEP-sponsored SKNAPD Computer Graphic Design, Microsoft Office, and Craft-making group will take part in the Miss Prestigious and Ambitious Pageant.

According to Ms Nurse-Clarke, who is also the Secretary of the St. Kitts-Nevis Association of Persons with Disabilities, the pageant has been organised by the Women’s Network of the SKNAPD, which is led by Ms Petra Pringle – President, as part of Independence Day-32 celebrations.

“The Women’s Network of the SKNAPD is a vibrant group of ladies with different forms of disabilities,” stated Ms Nurse-Clarke. “They have decided for this year’s independence celebrations they are going to hold a pageant show.”

She pointed out that in spite of the status of the contestants, the network decided against giving the show a title that would suggest that the contestants have some form of disability, “because even though they have disabilities, they still have ability. So the name of the show will be Miss Prestigious and Ambitious Pageant.”

The four contestants are Ms Sharon Dasent, 37, who going into the show as ‘Miss Patience’, Ms Erica Rouse, 20, who is ‘Miss Joyful’, Ms Monique Pemberton, 24, who is ‘Miss Kindness’, and Ms Latisha Murray, 30, who is ‘Miss Sincere’.

“The four contestants are under the People Employment Programme (PEP) at the Community Centre at McKnight,” said Ms Nurse-Clarke. “As part of the social life skills, we are going to be keeping this pageant so that they can see out of the programme that they are doing here, they are not only coming here because they are getting a salary, but to show that they are here for a reason.

“They are here to do things; they are here to learn things. Since they have been here they have learnt a lot of things. They have lifted up their self-esteem so that they are able to go out and perform. Life skills is taught to them by Ms Shirley Adams, Pastor Keith Warner, Mr Anthony Mills (President of the SKNAPD), and myself.”

The show will be managed and coordinated by Mr Vincent Fough, and providing musical entertainment will be the Fingers and Toes Band, while entertainer Purple would be hosting the show, which starts at 7:00 p.m. at the St. Peter’s Community Centre.

“It is going to be an exciting show,” said Ms Mary Nurse-Clarke. “It is going to be really exciting and we are asking for the public to come out and support the contestants as they go out and show the world that even though they have a disability, they still have the ability to perform in society.

“We are looking for the public to come on out to support these ladies because is it going to be a show you have never seen before.”

The contestants are very excited, according to the PEP Facilitator. It started showing when it was decided that Miss Photogenic would be voted by the public and to make work easy for the public, pictures of the contestants were posted on the Facebook page of Women with Disabilities and visitors to the page were asked to like the contestants.

The one with most likes would be declared Miss Photogenic, and closing time for voting was 9 o’clock on Thursday night (September 10). According to Ms Nurse-Clarke, contestant Miss Kindness (Ms Monique Pemberton) was adjudged the winner having amassed a total of 105 likes.