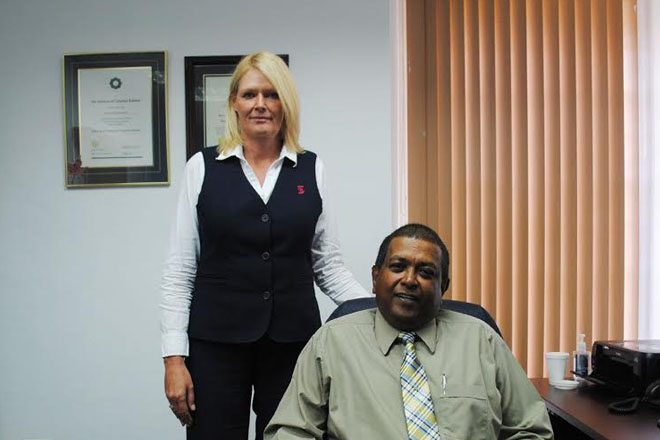 Basseterre, St. Kitts (June 29, 2015) — General Manager and Country Head of a leading international bank is lauding the People Employment Programme (PEP) for preparing citizens of the Federation for work and to better prepares themselves for life.

“Scotiabank supports the People Employment Programme because we believe it is the right thing to do,” said Mr Devanand (Dave) Ramsumair, Scotiabank’s General Manager and Country Head. “It gives back to the community, in that you are helping the citizens of the Federation. You prepare them for work and for employment and to better prepare them for life in general.”

Mr Ramsumair , who made the remarks in a recent interview from his Fort Street office in Basseterre, added that what PEP is doing is something that a good corporate entity like Scotiabank sees as part of its social responsibility, because part of the bank’s programme is to help and train young people as best as they can.

Both he and the bank’s Manager for Operations and Administration, Ms Charlene Acquisto, have a Canadian working background where similar programmes are employed, and he said that their experience would have complemented the People Employment Programme in a lot of ways. Mr Ramsumair is from Toronto, and Ms Acquisto is from Manitoba.

He explained that local governments in Canada would have at various times sponsored work programmes where they would contribute a small amount towards the employers who would then take in people to train them, and if they had an opening they would take those workers in.

“So we believe that it is the right thing to do,” commented Mr Ramsumair. “We get the chance to see the young person working first hand, and certainly I think it is a win-win situation.

“I compliment the government on extending the programme, because I think for the young folks it is the right thing to do, and so long as the programme is around, and it continues to operate in a manner we are happy with, and it is reputable, and it is running in an efficient manner we will continue to support it. We are committed to continue supporting it.”

According to Ms Charlene Acquisto, Manager for Operations and Administration, the bank received a letter from PEP in the mail, outlining the programme. She contacted the PEP office to find out more and after talking to PEP Assistant Programme Coordinator Mrs Diana Pemberton they agreed to take on some workers who were placed in different departments of their branches in St. Kitts and Nevis.

“We try not to keep them in one department,” explained Ms Acquisto. “We have them trying cross training in other departments, so what they feel they are interested in they will let us know and then we try and position them when a position comes available. And so far, it has been great.”

She explained that the Nevis branch has taken on someone from the programme, and the main branch has hired two individuals, while the Bird Rock branch took on one of the PEP workers.

“We still want to continue because we do know that shortly we will need replacements as we have some junior staff as tellers going back to school,” noted Ms Acquisto. “So we will be interested, if the programme is still up and running, to accept individuals. But we are very pleased with the programme, very pleased.”

Ms Jenelle Jordan is one of the PEP workers who joined Scotiabank in June last year. She is a former student of the CFBC who indeed received her examination results while working at the bank. While there she was exposed to several departments as part of the bank’s cross-training. She is no longer being paid by PEP as the bank has given her a job contract.

“PEP is definitely helpful,” observed Ms Jordan. “Instead of people being at home with nothing to do, it helps them to get out and even if they may not definitely be employed right away, at some point they will be employed at a specific firm. PEP also helps by screening job applicants and after they find out what area one is best suited to go and work, they link and match one with a suitable employer.”

Project Manager of the People Employment Programme, Mr Geoffrey Hanley, has thanked Scotiabank for its fruitful partnership with the programme as this is helping ambitious and qualified young persons get quality jobs with an international organisation.

“Scotiabank have been with us for quite a while and I am happy to report that of all the persons that we have recommended to Scotiabank for employment and training in the banking sector after the PEP participants’ probation period, Scotiabank has taken on all of those persons who were given the opportunity to work with the bank,” noted Mr Hanley.

“This we are hoping would continue not only in the relationship, but as a means of encouraging other financial institutions where PEP workers have been, especially for a while, for them to follow the footsteps of Scotiabank and do well to take them on. Others have done so, I must say, as well, but we are asking it to be done more rapidly, as we continue to give other young persons opportunity to be a part of the People Employment Programme.”