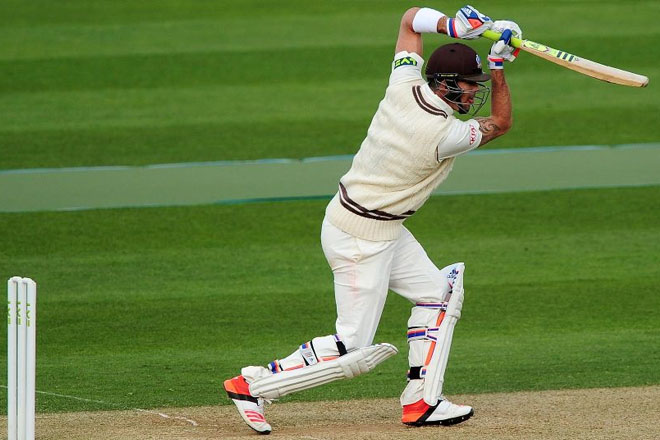 Sports Page — “Are you watching Andrew Strauss?” sang the crowd, as Kevin Pietersen soared to a career-best unbeaten 326 at The Oval. They were aware of what Strauss’ appointment as the new director of England cricket – he will be officially unveiled at Lord’s on Tuesday – is likely to mean for Pietersen’s future as an England cricketer. But Pietersen is not giving up without a fight.

Pietersen followed up the highest score of his life with a crisis meeting with Strauss and the ECB’s chief executive, Tom Harrison.

If a tweet from close ally Piers Morgan was any guide – and Pietersen did not deny it – he expected to be told that he has no England future. The BBC later reported that the ECB’s new heirarchy did not budge despite what his supporters saw as 326 reasons to the contrary.

That would render futile Pietersen’s desperate attempts to force his way back into the Test team for the Ashes, a quest which had led him to abandon the razzmatazz and riches of the IPL for early April against the students of Oxford.

So there was more than a hint of anger underpinning Pietersen’s swat for six over square leg off Jigar Naik, which brought up his maiden first-class triple century. He looted 289 runs in the day. On the ground where he made an indelible mark upon the 2005 Ashes a decade ago, he pummeled 14 sixes, each hit with more venom than the last.

Yet there was also a certain sadness to it all. Pietersen will probably be compelled to play out the final three weeks of the IPL season, owing to the demands of his franchise, Sunrisers Hyderabad. By the time he returns, he might have reconciled himself to not having an England future. This unrelenting assault on Leicestershire could conceivably be the last sight of Pietersen in English cricket.