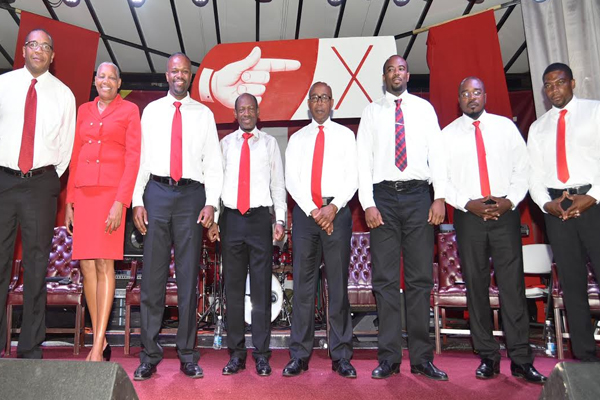 “Tonight my dear citizens and comrades, for the sixth consecutive time I have come before you to present yet again a winning team for the next elections. I first did that in 1993 and at that time the results were a tie (although the Party gained well over 50 percent of the popular vote) – Labour has never lost under Douglas, never has labour lost under Douglas, we had a tie and you would know that as a result of that tie we had to go back to the polls in 1995. So it is the sixth time tonight 1993, 1995, 2000, 2004,2010 and now again in 2015, six consecutive times, each time a winning team of candidates and this time around it has to be the same my dear comrades and friends,” he told the mammoth crowd at the Shoreline.

“I bring to you a winning team of candidates. It is a winning slate of candidates. What you do with this team is up to you, but I bring you a winning team of candidates of the St. Kitts and Nevis Labour Party that can win. You must work to ensure that this team assembled here on this platform each of whom presented himself or herself to you tonight. Each one is a winner. You have to play your role. You have to perform your duties to ensure that they win and so I say to you that just in the same way that we are presenting here in St. Kitts, the team of the Labour Party, very shortly the team of the NRP will be presented and they too must be a team of winners all three of them,” said the Prime Minister.

Prime Minister Douglas added that it is not only to God that he lift his heart in praise and thanksgiving.

“I lift my heart and my hands tonight to the founders of our great Party, the leaders of our great Party, those of the past and those of the present, the stalwarts of our Labour Party who have laid the foundation and who have made it possible for us to be assembled here to lead again on their behalf, so that the people can have social justice and freedom; so that their children can live in a free country not only this generation and the one after, but generations yet to come far into the future,” he said.

“I thank the stalwarts and the warriors in each constituency. We lift our hearts and say thanks to all of you for the tremendous support you have provided to the Labour Party and to us over the years,” Dr. Douglas added.

He however used the opportunity to thank my people of St. Christopher Six, who first elected him to the National Assembly 25 years ago.

“I could never have become what I am today. You sent me to Parliament in (March) 1989, you sent me back in 1993, you sent me again in 1995, in 2000, in 2004, in 2010 and you shall send me back in 2015 again. It is from Constituency #6 that I get the energy, the dynamism, the fierceness, the fighting spirit that tells me I am a warrior, never back down that’s where I get it from. Number 6 they invigorate me, they command me, they are the ones who keep me going day after day, night after night to fight and to serve all people of St. Kitts and Nevis,” said Prime Minister Douglas, currently the longest serving Prime Minister in the OECS, the Caribbean and the 55-nation Commonwealth.

“Every single one of them is working hard, especially over the last two years. Cabinets of the past and the Cabinets of the present, but in particular this present cabinet which underwent two years of tribulations, but was still able to craft policies and programmes that were presented to the Legislature making sure that they were rooted with the appropriate legal instruments so that our Permanent Secretaries, Heads of Departments and public servants can carry out and execute those policies and programmes. Let us give them all – public servants and cabinet ministers – a tremendous applause for their support especially over the last two to three years during which we witness the turnaround in the National Economy,” said the St. Kitts and Nevis leader.

“Tonight my dear comrades, every single public civil servant deserve recognition in each of the ministries. Every single ministry and department of the government. Those who are nurses, doctors, those in the essential services, police, fire and rescue services. Those in the defence force. Those who are in the private sector as without their support, we could not have advanced the country and achieved what we have achieved to date,” said Dr. Douglas, who added:

“The private sector I say to you we understand the importance of your partnership as we take St. Kitts and Nevis to the next level. This team that is assembled on this platform they need the support of the business community big and small. The small entrepreneurs who are trying to make it even the woman who is selling from their trays, the vendors, we need your support, everybody must be on board as we take this great country to the next level.”

He said his Cabinet of Ministers and each and every resident and citizen has played a role so that St. Kitts and Nevis can boast of the several achievements.

“Number 1 in foreign direct investment. #1 in growth in our national economy. #1 where we have less than 80 percent Debt to GDP. I commit to you tonight that by 2020 there will be no debt whatsoever for St. Kitts and Nevis.#1 in employment statistics – almost nil unemployment here in our country. #1 in terms of the value of exports to the United States of America in the Eastern Caribbean; #1 my dear comrades, in the recovery of the tourism industry compared to other countries around the Caribbean region; #1 in our creativity and innovations to make sure that our Citizenship by Investment Programme becomes the leading program globally; #1 in our creativity and our ability to be creative by creating the P.E.P. – 4000 people being trained in skills and being paid at the same time no other country in the world has done that,” Prime Minister Douglas told the mammoth crowd.

He also highlighted that St. Kitts and Nevis leads the OECS and several other Caribbean nations in having the highest minimum wage in the private sector.

Prime Minister Douglas saluted the ladies and other workers on the Industrial estates, and employees in hotels and restaurants advising that “even though you are making up a bed, you are performing a critical role in advancing tourism and advancing your country to the #1 destination.”

“Therefore you deserve everything that we have given you. You deserve to have the long service gratuity reward. You deserve to have full support for your medical bills whenever a member of your family falls sick, that is why in the future we shall have a National Health Insurance Scheme that will take care of you. We are certain that it is because of our love we have for you and your children why today you don’t have to buy uniforms, you don’t have to transport your children to school, you don’t have to give them hot meals,. They are being provided these by a caring Labour government that’s why we can say that we are #1 and we will go to the highest level in the future,” Dr. Douglas said.