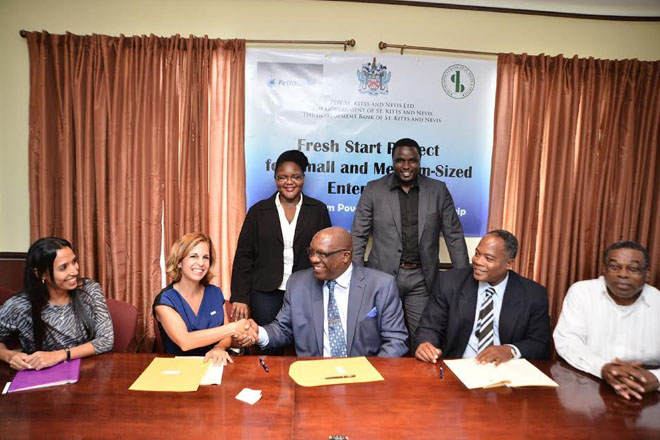 Basseterre, St. Kitts — Team Unity Administration has in a most effective way been leveraging the country’s foreign policy in ways that have redounded to the benefit of ordinary citizens of St. Kitts and Nevis.

Prime Minister and Minister of Finance, the Hon Dr Timothy Harris, made those remarks on Friday (September 4th) when he signed a loan agreement of US$5 million with the Government of the Bolivarian Republic of Venezuela through its Petróleos de Venezuela S.A. (PDVSA) St. Kitts-Nevis Limited.

“This is our second major new initiative with the Government and people of Venezuela through the PDVSA,” said Prime Minister Harris. “In the first initiative which we publicised at an event in the Cabinet, we were able to secure EC$16 million to satisfy the felt needs of former sugar workers who felt short changed when in 2005 the industry was closed.”

Witnessing the signing ceremony were the Hon Ian ‘Patches’ Liburd, the Minister of Public Infrastructure, Posts, Urban Development and Transport who also chaired the proceedings; Ms Monica Liendo, 1st Secretary Venezuelan Embassy in St. Kitts and Nevis, who was representing the Ambassador; Mr Alexis Nisbett, acting Chairman of the Development Bank Board; and Ms Deniece Alleyne, a director of the Development Bank.

The money which has been deposited in a special account at the Development Bank of St. Kitts and Nevis is intended to be loaned to operators of small to medium enterprises (SMEs) in the Federation in a project appropriately named Fresh Start – (SMEs) From Poverty to Entrepreneurship.

According to Prime Minister Harris, the project will be targeting those who need the support most giving a fresh start to young and not so young entrepreneurs who otherwise are finding it difficult to be able to access financing from the commercial financial enterprises which require equity and, or deposits.

The Prime Minister said that the draft agreement provides that they will remove the equity hurdle requirement which ordinarily represents a barrier to the target groups – those starting or rebuilding of a small to medium business ventures.

“Many times cooperation agreements are not seen,” pointed out the Prime Minister. “This one will not only be seen, it will be felt by the ordinary people. Team Unity is about making a careful difference in the lives of people, and taking people to the point of independence – a point of self-reliance. One of the best ways to achieve that self-reliance is to have successful business ventures.”

Prime Minister Harris assured that the process of giving out loans will not be contaminated by preference of government and as a result, the Development Bank of St. Kitts and Nevis has been tasked with the responsibility of disbursing the loans, which he said was found to be a realistic and proper mechanism.

He added that there will be a new element of transparency with respect to a full disclosure involving all the critical parties, the Government of Venezuela, the Government of St. Kitts and Nevis, and the Development Bank, so people are aware what is to happen and how it will happen.

The Prime Minister advised that they will on a quarterly basis provide records of non-confidential information with regard to the number of applicants, the number of people who have succeeded and the core subsectors benefiting so as to give a clear sense of how the government is progressing with this new initiative.

“Many thanks to the President of Venezuela (HE Nicolás Maduro) who has been executing the vision of his predecessor, Hugo Chavez, and indeed working within the ambit of the vision of Simon Bolivar for an Americas in which people are cooperating,” commented Dr Harris.

“Thank God for the Government of Venezuela, and thank God for the Team Unity Government, we have at least a mechanism that will give them (SME’s) a fresh start and a new start in that area of engagement. And so I want to say how profoundly happy I am because this is part of our manifesto commitment – a fair share for all.”

In her brief remarks, Ms Maria Andreina Colmenares, General Manager of PDV St. Kitts-Nevis Limited, observed that while people know of the PetroCaribe agreement which deals with oil, the new agreement goes beyond the trade of oil as it is for the development of the people, culture and many other things.

“We think this project will have a significant impact on poor persons and the marginalised youth directly through the access of capital for small businesses,” said Ms Colmenares. “This is the beginning of many other projects that we will do through the PetroCaribe Agreement with the government of St. Kitts and Nevis.”