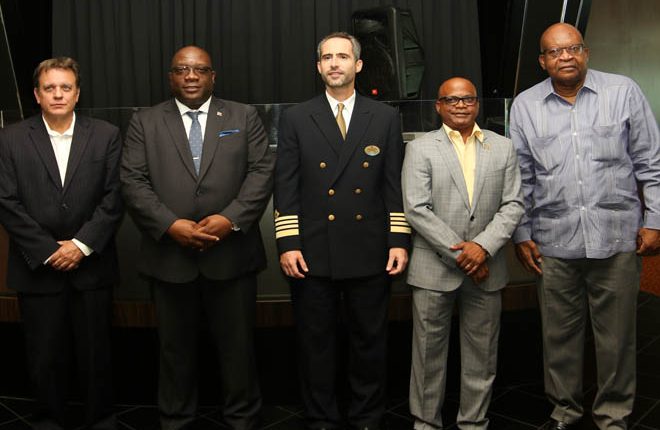 (SKNIS): On July 16, St. Kitts and Nevis welcomed for the first time in any cruise season the one millionth cruise visitor. The twin island Federation has now achieved the coveted international status as a marquee port, the only marquee port in the OECS (Organization of Eastern Caribbean States) at this time, says Prime Minister of St. Kitts and Nevis, Dr. the Honourable Timothy Harris, speaking at his monthly press conference on July 17.

The hard work to elevate St. Kitts and Nevis into a marquee destination was an incredible feat, said the prime minister, noting that there were several key players that led to the country’s success.

“I commend our Minister of Tourism, Hon Lindsay Grant; the Tourism Authority led by Ms. Racquel Browne; and all stakeholders, including our taxi operators, tour operators, craft vendors, and other service providers, without whom such an historic moment would have never been realized,” he said.

The prime minister said that St. Kitts and Nevis is one of some 25 cruise port destinations in the Caribbean to be so highly acclaimed and branded. “This is a historic moment. The smallest Country in the western hemisphere is leading the world in cruise tourism,” he said.

Prime Minister Harris said that achieving marquee status over a short period of three years could not have been imagined.

“Who would have imagined that in the short time span of just over three years a Team Unity Administration would have achieved such a feat? We are now poised to be the best cruise destination in the world. Such a target is well within our capacity and capability if we simply work together in Unity,” he said.

Having achieved marquee status, said the prime minister, the government has to “double down and ensure that we maintain this coveted classification year after year.”