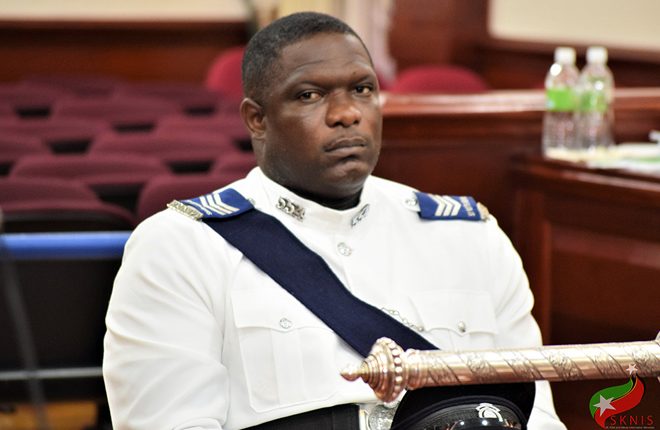 (Press Unit in the Office of the Prime Minister) – Prime Minister and Minister of National Security, Dr. the Honourable Timothy Harris, joined citizens and residents of St. Kitts and Nevis in mourning the death of Mr. Dwight Davis, who at the time of his demise served as a sergeant within the Royal St. Christopher and Nevis Police Force (RSCNPF).

Speaking during Wednesday’s sitting of the National Assembly, Prime Minister Harris publicly expressed his sincerest and heartfelt condolences and those of the Government and people of St. Kitts and Nevis to the family and loved ones of Sergeant Davis, who was tragically shot and killed.

The St. Kitts and Nevis Prime Minister stated that he earlier met with relatives of the late Sargeant Davis at which time he personally expressed his condolences and sadness for the tragic loss of life.

Prime Minister Harris also paid tribute to Sergeant Davis, particularly for the “valiant service” he rendered to St. Kitts and Nevis as a member of the Police Force.

As investigations into Sergeant Davis’ untimely death continues, the National Security Minister reaffirmed the government’s commitment to fully supporting the men and women of the security forces “as they endeavour to defend the safety and security of our great country.”

Dr. Harris further sought to encourage everyone to show his or her support to the Security Forces by providing any information one may deem relevant in clarifying the circumstances surrounding the death of Sergeant Davis, adding, “If you saw something or know something, please contact a member of the Police High Command or Crime Stoppers.”

Meanwhile, Speaker of the National Assembly, the Honourable A. Michael Perkins, expressed his own condolences to the family and loved ones of the late Dwight Davis, who served as a Sergeant at Arms in the Federal Parliament.

Speaker Perkins then called the Honourable House to its feet in observation of a minute of silence in honour of Sergeant Dwight Davis.