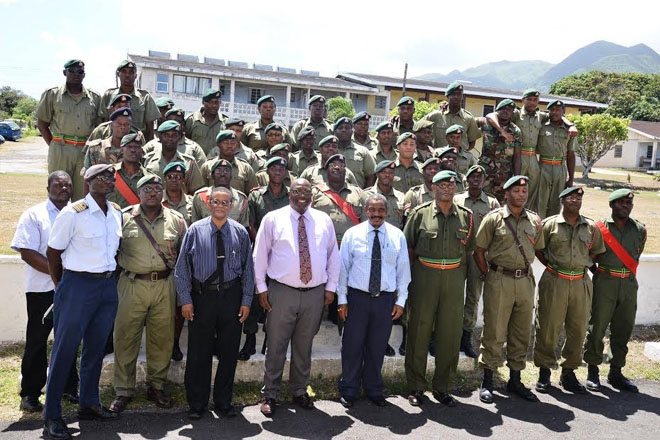 PM Harris: There Can Be No Prosperous Nation without the Safety and Security of the People

Basseterre, St. Kitts — Prime Minister Dr. the Hon. Timothy Harris stressed how critically important peace, safety and security is to the wealth of our nation and the implementation of the ‘Prosperity Agenda’ that his Team Unity administration embarked upon immediately after the conclusive general elections of February 16, 2015.

The Prime Minister was at the time (yesterday) visiting the St. Kitts and Nevis Defense Force (SKNDF) on a listening tour, as Minister of National Security.

Commander Wallace gave introductory words of welcome and said he was honored to have the Prime Minister amongst them. After inspecting a guard of honor, the Prime Minister was taken on a tour of the SKNDF Headquarters before being invited by Colonel Wallace to address the proud men and women of our security forces.

Before proceeding to an engaging question and answer session, the Prime Minister thanked the Commander for inviting him and said he was happy to be there to speak with and hear from the men and women who serve as the “first and last line” in defense of our nation.

“We are at this time battling some major security challenges and I want to thank the Commander and all of you who have participated in joint missions with our police…the police has the primary responsibility for the maintenance of law and order in civil society”, Dr. Harris said.

The Prime Minister made mention of the new and successful deployment of soldiers to Nevis to assist police crime fighting efforts there and to “restore the peace and tranquility of which Nevis has long been famous”. He promised that those type of efforts will continue to be executed throughout the Federation, in collaboration with all units in the national security apparatus including Customs and Coast Guard, in sustained, deliberate and targeted operations to root out the criminal elements in our midst and in so doing maintain law and order in our society. “Given the increased challenges to law and order by certain misinformed people and in particular young people, we have had to from time to time place a heavy demand on the soldiers and the security forces wherever located to ensure that we are able to respond robustly and strongly to any threat to law and order within the Federation of St. Kitts and Nevis.”

After the almost 2-hour question and answer session, Prime Minister Harris closed by again thanking the members of the Defense Force for their dedication, sacrifice and service to country. He said that it is because of the diligence of the men and women in uniform, the risks that they take night and day to preserve the peace and keep our nation and people safe, that we are able to live, work and prosper in this beautiful Federation of St. Kitts and Nevis that we all love so much. He said his administration promised a “Fresh Start” for the nation and promised to go “all the way” to ensure that all residents and citizens, including the energetic, disciplined and committed members of the Defense Force, get their “Fair Share” of opportunities and “Prosperity”.

“We came to office on a mandate to do better for people…we came to government with a mandate to bring prosperity and fairness to all of our people. And so we can say that those who serve in the Defense Force are part of the large family of the country and we will not leave you behind…whatever have been the challenges of the past, we have now only the present and the future to work with”, the Prime Minister emphasized.

“We are fully committed to the agenda of improving people’s lives, of ensuring that the working folks would be able, from their hard labour, to be able to take care of themselves and their families. We make the point that there can be no prosperous nation unless the nation is safe. And that is why I am particularly pleased that so many of you, so early in your working life, have given yourself the opportunity to ensure the peace and safety of St. Kitts and Nevis”, the Prime Minister said.

He ended by saying, “we will make the future better for all the people of St. Kitts and Nevis. That is the commitment which we take with great care and so we will work diligently as your servants to bring a better quality of life to you and your families.”