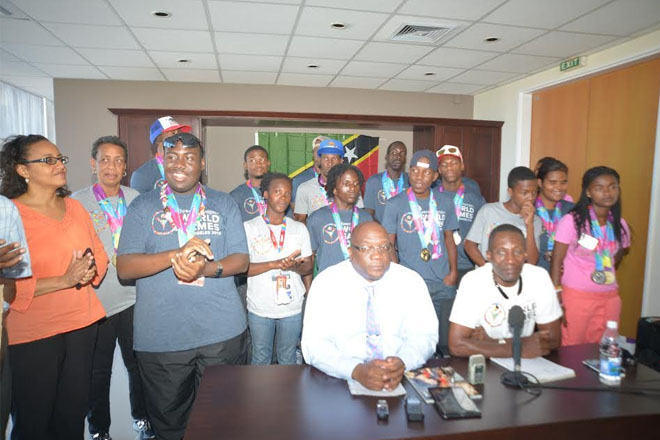 Basseterre, St. Kitts — Prime Minister Dr. the Hon. Timothy Harris was part of a large welcoming party, which included Junior Minister of Health, Senator the Hon. Wendy Phipps and other senior government officials, parents, officials from the National Olympic Committee, coaches and other well-wishers, that turned up at the Robert L. Bradshaw International Airport VIP Lounge earlier today to welcome home our very special, Special Olympians who made our nation proud once again.

In welcoming our very Special Olympians, Prime Minister Harris thanked the large crowd that turned out at short notice to “give a national welcome to the heroes and heroines who represented St. Kitts and Nevis abroad”. On behalf of the government he thanked all the participants for an “excellent showing” at the recent Games. “Their performances have been exceptional…they brought glory to the name of St. Kitts and Nevis”, he said. PM Harris went on to promise further national recognition for the athletes. “The national community deserves to provide them with continuing support and acclaim. And so I am happy that so many of you came to the airport today and we were able to put this simple ceremony together and at a later date the line Ministry will appropriately, in a more celebratory way, reflect the deep commitment and support of the government and the nation for this outstanding accomplishment.”