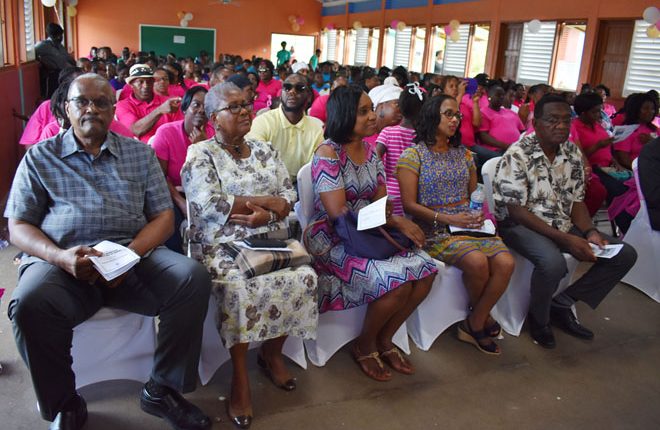 Basseterre, St. Kitts, September 10, 2018 (SKNIS): Parents, guardians, and adults in general were reminded of the transformational impact of spending meaningful time with children during the launch of the Cayon Explorers – the fifth such youth club in St. Kitts and Nevis to be formed.

At a launching ceremony held at the Cayon Primary School on Saturday (September 08), Woman Police Constable (WPC) Neikesha Thomas, of the Community Policing Team, recited the first four lines of the song “The Greatest Love of All” made famous by Whitney Houston and noted that after her 16 years of being in law enforcement, she welcomed the additional opportunity to directly mould the nation’s youth.

“Look around, what do you see?” she asked the persons attending the ceremony, which included senior government officials, senior police officers, parents and other well wishers. “A room filled with bright, beautiful, young people. Young people with promise, young people who will be agents of change, young people who I would like to see take this country to a higher level.”

To achieve this, the officer shared some words of encouragement. The first was an appeal to parents to become familiar with their children’s friends, know where they hang out, and what they do when they are away from home. Creating opportunities to engage with their children was another point.

“Some parents … [don’t] give children the attention they so rightfully need. Sometimes … you come home from work, you are tired but they need the attention. Some parents don’t even know when last they told their children I love you! These children want this affection,” WPC Thomas stressed, adding that this will help to reduce the need for them to find such expression in other ways that may not be positive.

The adults were also encouraged to get their children involved in character building programmes and activities, as well as to pay equal attention to the welfare of male and female children.

“Too many parents shield their daughters and forget their sons,” she stated. “Even though we don’t want any pregnancies in our homes, it is even worse when you are sleeping and have to be wondering where my son is?”

The 16-year-veteran police officer said that over the years she has seen too many young persons go “astray” and she was committed to making a difference. Members of the audience were encouraged to share this commitment.

The Explorers Group is an initiative of the Ministry of National Security and is designed to foster positive attitudes in youth across various communities. There are Explorer Groups in Molineux-Phillips (Mol-Phil), Shadwell, St. Paul’s and St. Peter’s.