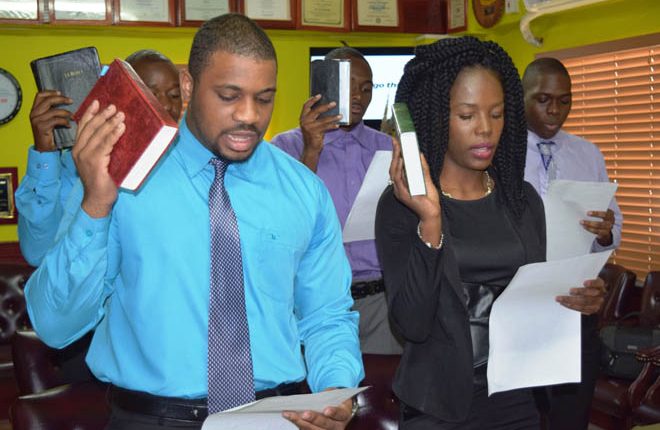 Police Service should be first option for nations best and brightest

(RSCNPF): Commissioner of Police Mr. Ian M. Queeley is encouraging young men and women in St. Kitts and Nevis who are looking for a career where they make a difference to consider an enlistment in the Royal St. Christopher and Nevis Police Force.

Commissioner Queeley said, “the Police Service currently has a number of vacancies and we want the best and brightest to join our ranks. The Police Service is transforming to meet the challenges of fighting crime in the 21st century and we need young people who can think critically, who are not afraid of technology and who are of good character.”

He added, “the days of brawn being a major characteristic for an Officer are gone, we need young men and women with brains,”

Force Personnel Officer Mr. Clifford Govia outlined the requirements for enlistment. All candidates interested in enlistment must have a minimum of four (4) CESC subject passes including English, have excellent written, oral and interpersonal skills. Candidates should also be physically fit, be 18 years of age, but not have passed their 35th birthday. Pass a medical examination, pass a background investigation and submit to a polygraph examination. And must possess a valid driver’s license.

“A career in the Police Service can be rewarding,” said Force Personnel Officer Mr. Clifford Govia. Mr Govia outlined that the benefit package for a recently graduated Police Constable is attractive and stated that the salary started at $2140.00 per month plus an additional $356.00 per month in risk pay and other allowance are also available based on assignment.:
He noted, “the salary for a Constable with a Bachelor’s Degree is $4495.00 plus $356.00 per month in risk pay.”

In addition, the Force Personnel Officer pointed out that other tangible benefits are also available such as 100 percent medical coverage, Dental Coverage, Vision Coverage, 21 days annual vacation, and the opportunity to participate in Force Funded CESC and CAPE classes in off duty hours. He also noted that through a partnership with Monroe University, Officers are granted preferential tuition rates. The opportunity to join a financially stable Credit Union is also a tangible benefit of service. Additionally, another real benefit of the Police Service is the opportunity to quality to obtain a gratuity after 10 years of service, and a gratuity and retirement package after 15 years of service.

The Police is particularly interested in young men and women who possess skills in areas such as Accounting, Computer Science, Biology, Physics Chemistry and Foreign Languages, specifically Spanish and Mandarin.

All young men and women of good moral character and physical health are encouraged to consider a rewarding career in the Forces. Persons interested in a career in the Police Service can contact the recruiting officers at the following numbers: The Royal St. Christopher and Nevis Police Force at (869)-465-2241 ext 4272/4217.