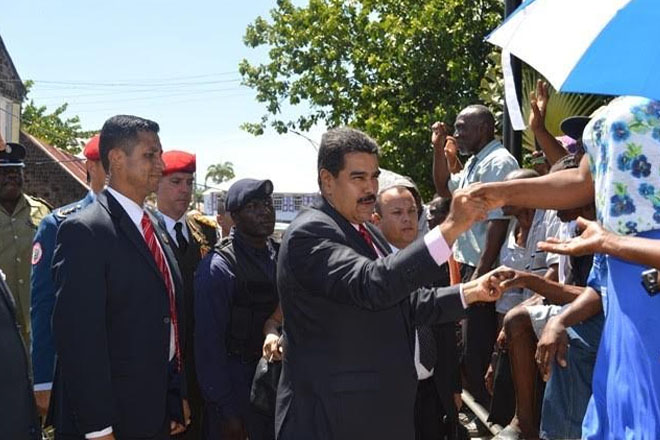 Basseterre, St. Kitts (SKNIS) — President of the Bolivarian Republic of Venezuela, His Excellency Nicolás Maduro Moros, shared genuine sentiments for the people of St. Kitts and Nevis as he personally presented cheques to Samuel Wilson and Vivian Hope, two former sugar workers, and presided over the signing of a Memorandum of Understanding (MOU) as symbols of the strong bonds of friendship and solidarity between the two countries.

The activity was a high point of the Venezuelan President’s inaugural visit to the twin-island Federation on Wednesday (September 23rd). The presentation was made at a ceremony in front of the Sugar Workers Restoration Fund Secretariat on South Independence Square Street.

The EC$16 million for the former Sugar Workers was donated by the Venezuelan Government in support of the Government of National Unity’s pledge to compensate persons who did not receive compensation or the full amount owed to them when the industry closed in 2005.

The MOU signed between the two countries paves the way for bilateral relations in a number of areas including housing, infrastructure, law and order, education and training, agriculture, energy, technical assistance and health. Under health, it is expected that locals with various eye diseases will be able to access specialist medical treatment from Venezuela through the Miracle Mission programme.

President Maduro said the support for St. Kitts and Nevis, which is primarily facilitated through the PetroCaribe agreement, is in keeping with the vision to “create a new world based on equality, solidarity and peace for all.”

“We have done a lot, but as I said to my brother Timothy Harris, there’s still a lot to do in the future,” President Maduro said. “It is undeniable that without PetroCaribe … this region might be facing the terrible and painful situation that today [exists] in Africa, in the Middle East and other areas of the world.”

The President of the Bolivarian Republic of Venezuelan said new goals for the future needed to be set in order to strengthen trade and the economy between the two diplomatic allies. He also spoke about expanding cultural ties through poetry, music and other areas.

Prime Minister, Dr. the Honourable Timothy Harris, thanked President Maduro for the support St. Kitts and Nevis has received over the years. He specifically mentioned the contribution for the former Sugar Workers hailing it as a move to “correct an injustice.”

The Prime Minister said Venezuela “can count on the strong support of St. Kitts and Nevis unconditionally, in good times and in the bad times.”

“We will be a friend of Venezuela,” he stated.