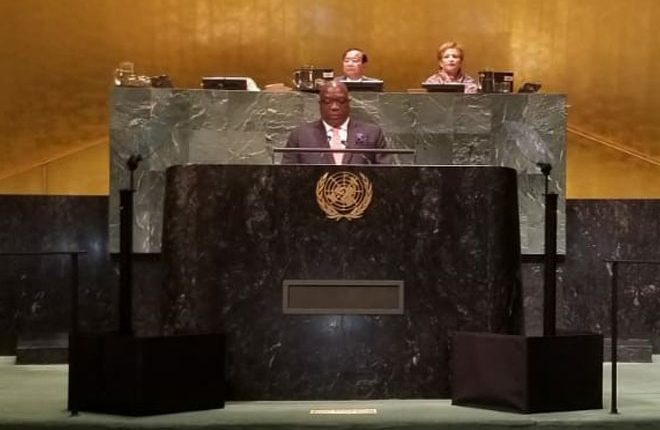 BASSETERRE, St. Kitts, September 28, 2018 (Press Unit in the Office of the Prime Minister) – The Prime Minister of St. Kitts and Nevis, Dr. the Honourable Timothy Harris, agreed with the general consensus expressed during the General Debate of the United Nations General Assembly this week that urgent reform of the august body is needed if it is to meet the demands of an evolving international community.

In a well-received presentation to the General Debate at the 73rd Session of the UN General Assembly today (Friday, September 28), Prime Minister Harris remarked that the United Nations continues to be critical to global peace, progress and prosperity.

However, the Honourable Prime Minister noted that, “There is need to move urgently to reform the UN making it more responsive to the needs and concerns of all and in particular Small Island Developing States (SIDS).”

Guided by the theme for this year’s debate, “Making the United Nations Relevant to All People: Global Leadership and Shared Responsibilities for Peaceful, Equitable and Sustainable Societies”, Prime Minister Harris said, “My delegation is of the view that this theme allows us to address the unfairness and inequity of the international development order and we urge a new and more inclusive, equitable and sustainable development paradigm.”

Dr. Harris further expressed that the UN, as a body, has become too preoccupied with summitry and less on delivery, while the cooperation deficit among member states stymies the forward march of humanity.