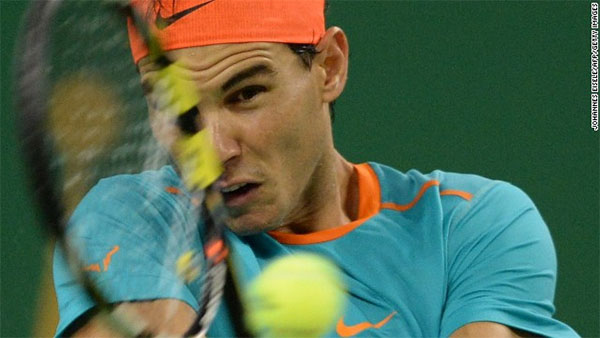 Rafael Nadal plays through the pain barrier despite appendicitis scare

(CNN) — Rafael Nadal may have warranted a reputation for playing through the pain barrier but surely not appendicitis.

The world number two has apparently been struggling with the condition in the build-up to this week’s Shanghai Masters.

But whereas mere mortals might seek out their sick bed, Nadal has somewhat surprisingly instead opted to take to the court.

The Spaniard did at least attend a hospital in the Chinese city on Sunday after complaining of stomach problems and was treated with a course of antibiotics.

But with just two days of rest, he returned to action against countryman Feliciano Lopez Wednesday and was unsurprisingly below par — losing the match in straight sets 6-3, 7-6 despite a spirited second-set fight back despite his ailment.

For sure I don’t feel perfect,” said Nadal following the defeat, only his third to Lopez in 11 years. “It’s the same way I felt before, a little bit dizzy now but that’s it. Nothing that I have to worry about.

“When you lose a match, it’s not the moment to talk about obvious things. I lost, Feli played better than me.”

Nadal could be forgiven for feeling cursed. The previous tournament in Beijing last week had been his first since Wimbledon because of an on-going wrist injury.