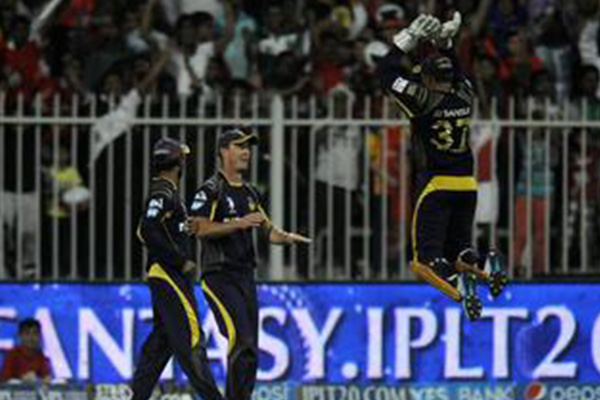 RCB lose after having game in the bag

How quickly does a Twenty20 game change? Ask Royal Challengers Bangalore. For virtually the entire duration, the match was in their grasp: their bowlers had combined to limit Kolkata Knight Riders to 150 on a flat track in Sharjah, their openers had put them on course in the chase, and even though Yuvraj Singh flapped about towards the end, the asking-rate was never out of hand. Even at the start of the final over with two renowned finishers, AB de Villiers and Albie Morkel, in the middle, Royal Challengers were favourites.

Nine runs were needed, and Knight Riders’ two major threats, Sunil Narine and Morne Morkel, had bowled out. Vinay Kumar stepped up to the job and delivered an over filled with full deliveries that kept his old team down to six, sparking delirious celebrations from the Knight Riders camp.

When a bowler defends nine off the final over in a Twenty20, that too against some of the finest hitters in the world, you’d expect him to hog the headlines. However, it is Chris Lynn who everyone will be talking about after he took a preposterous, acrobatic catch to send back de Villiers and turn the game in the final over.

De Villiers was looking to clear the long boundary at midwicket – the pitch was at the edge of the square – and though he connected well, there wasn’t enough to clear the rope. He might still have survived, as Lynn had slipped and fallen before the ball got to him. That didn’t deter Lynn, who leapt up and plucked that powerful hit bending his back like a high-jumper, and flopped to the ground, somehow managing it all without touching the rope which was a yard behind.