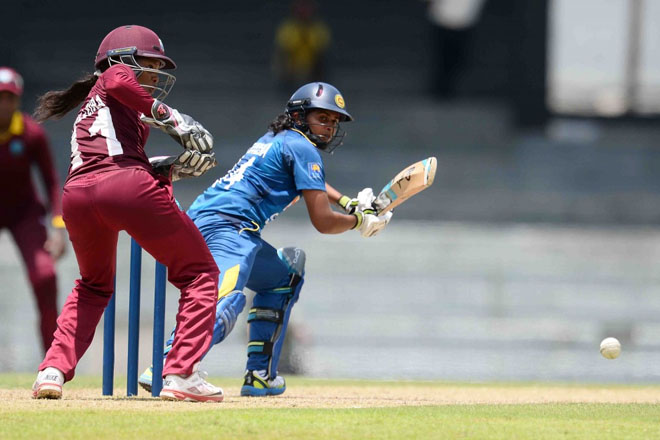 Colombo, Sri Lanka, CMC — Stroke-maker Deandra Dottin carved out a controlled, unbeaten half-century to haul West Indies Women out of trouble and guide them to a five-wicket victory over Sri Lanka Women in the opening One-Day International of the five-match series here Wednesday.

Tottering on ten for three in the fourth over in pursuit of an uncomplicated target of 150 at the R Premadasa Stadium, the Caribbean side were propelled by Dottin’s superb 84 off 113 balls, as they reached home with just under ten overs to spare.

The right-hander put on 31 for the fourth wicket with Shemaine Campbelle (8) but it was her 70-run stand with captain Merissa Aguilleira which put West Indies Women firmly in control.

Dottin counted nine fours while Aguilleira, who entered the game with question marks over her recent form, struck 30 from 48 deliveries with two fours.

When she perished in the 30th over with West Indies Women still requiring 39 for victory, Dottin kept her head down to add a further 42 in an unbroken sixth wicket partnership with Stacy-Ann King, who finished 18 not out from 38 balls and two fours.

It was Dottin who fittingly ended the game when she thumped off-spinner Shashikala Siriwardene to the boundary, off the first ball of the 41st over.

Seamer Eshani Kaushalya was the best bowler with two wickets for four runs, off three overs.

It was she who rocked the West Indies Women top order, prising out opener Kycia Knight for six and the dangerous Stafanie Taylor for one, within three deliveries of the third over of the innings.

Earlier, Sri Lanka was bowled out for 149 off the penultimate delivery of the innings, after opting to bat first.

They were undermined by 17-year-old off-spinner Hayley Matthews who grabbed three for 17 and fellow off-break bowler Anisa Mohammed who was brilliant in taking two for 15 from his full ten overs.

A collapse was far from the imagination, however, when Sri Lanka cruised to 79 without loss with Prasadani Weerakkody stroking 42 and Lasanthi Madushani, 23.

Once Mohammed claimed Prasadani caught and bowled in the 21st over and had Madushani run out two balls later in the same over, the innings went into decline as the hosts lost ten wickets for 70 runs.