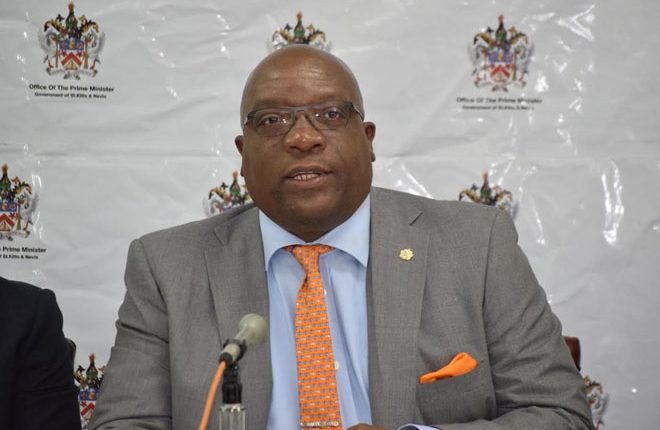 Robust policies and procedures aim to protect the integrity and reputation of St. Kitts and Nevis’ security forces

(PRESS SEC) – Safeguarding the public’s respect and confidence in St. Kitts and Nevis’ security forces is a priority of Prime Minister Dr. the Honourable Timothy Harris’ administration, which has established robust policies and procedures to protect the integrity of law enforcement agencies and officers.

“When the public has confidence in the integrity of our security forces, this leads to better information-sharing by them with regard to criminal activity,” Prime Minister Harris said during his press conference on Wednesday, May 31st, 2017 while discussing stricter recruitment vetting in the Ministry of National Security.

The Honourable Prime Minister who is also Minister of National Security stated that, “Our recruitment policy now requires that before anyone is admitted into our police service, they must undergo vetting. The results of vetting provide another indicator of the reliability of these potential recruits, highlighting their vulnerabilities and, of course, their strengths, too.”

Dr. Harris further stated that, “The results from polygraph testing feature then in what can be described as a composite quality assessment, which – when added to their educational level, references and background checks – will provide a comprehensive profile as to their suitability for employment.”

The Prime Minister of St. Kitts and Nevis went on to reveal at his press conference on Wednesday that, “Polygraph testing will be the norm at all levels of policing in our Federation. It is being applied in the recruitment and promotion evaluations at our Defence Force, including the Coast Guard, and the Customs and Excise Department.”

Prime Minister Harris also announced that his administration is implementing preventive internal controls within the prison system, in order to detect and deter breaches such as official misconduct and smuggling.

“We have been concerned about the entry of contraband into our prisons,” the Honourable Prime Minister said, adding that, “We are now procuring high-tech scanners, which will unmask illicit actors and products, thereby preventing them from entering into our prisons undetected.”

Last month, Mr. Junie Hodge, Superintendent of Prisons, spoke with the Press Unit in the Office of the Prime Minister about a recently implemented preventive internal control – each employee of Her Majesty’s Prison now has a locker. The lockers were installed in April.

“We now have lockers for the prison employees, so they cannot carry their bags or personal belongings beyond where the lockers are. No one can carry their cell phones outside of what we call the gate lodge,” Superintendent Hodge said.

In early May, the Superintendent of Prisons also said that, “If we suspect any employee of having contraband in their locker, the officer responsible for operation along with the Superintendent and that officer [who is suspected of having contraband] would go to the locker, we would have the officer open the locker and we would carry out the necessary search. The civilian workers have lockers also, so the same goes for them.”

Mr. Junie Hodge continued: “One of the things that the Superintendent’s Office has declared on is that once any officer contravenes any of the regulations, especially to bring in contraband into the facility, we will have that officer arrested and charged forthwith, because the officer was charged with the responsibility to ensure that these things do not come into the facility.”

During his press conference on Wednesday, May 31st, Prime Minister Harris made it clear that the Team Unity administration is committed to holding the Federation’s security forces – whose duty is to serve and protect our communities – to a high level of accountability and responsibility.

The Prime Minister of St. Kitts and Nevis added that persons who provide information leading to “a successful prosecution of any dishonest law enforcement officer will be rewarded.”

The Honourable Prime Minister explained that, “We do this to enhance the integrity of our law enforcement agencies. The reason is simple: those who are charged with protecting us cannot be the same ones who are undermining the integrity of the system and, by extension, exposing their co-workers and the civilian population to danger and harm.”