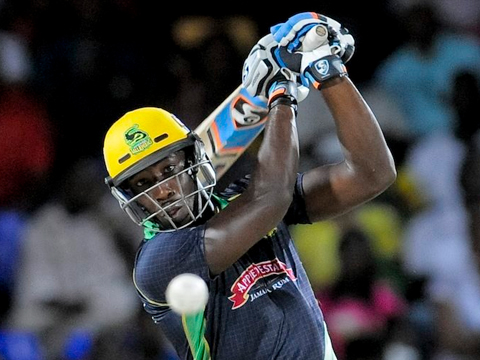 (Sports Page)— Jamaica Tallawahs were out for the count. Chasing 159 in the first semi-final against Trinidad & Tobago Red Steel, Tallawahs were 76 for 6 in 13.3 overs – they had just lost their top-scorer and were going at less than a run a ball. Then Andre Russell began hitting out, targeting midwicket straight down the ground and cover, and he did not stop. Russell plundered 62 off 27 balls, and Tallawahs stormed to an unlikely victory with two balls to spare.

Russell was on 2 off 2 balls when he refused a single and Nkrumah Bonner, on 39, was run out. Tallawahs needed 80 off 39 deliveries. He threw the first counterpunch a ball later, smacking Shannon Gabriel over long-off for the first of four sixes. Russell then took a single to keep strike and launched Kevon Cooper over the midwicket boundary.

Just when there were signs of life in the Tallawahs chase, Russell and Rusty Theron played nine balls without a boundary, and the equation rose to 54 off 26 balls. Russell hacked at that with consecutive sixes off Jason Mohammed, both powerfully hit over midwicket. Theron did his bit by going at a run a ball and rotating strike.

Russell’s blitz overshadowed Ross Taylor’s innings-reviving 70 off 44 balls for Red Steel, after they had been sent in to bat. David Bernard had reduced them to 36 for 3 in 5.4 overs before Taylor and Darren Bravo added 110 for the fourth wicket. Taylor was the aggressor, hitting three sixes and seven fours, while Darren Bravo used up 35 balls to score 33.

Red Steel, however, did not have a powerful finish after Taylor was dismissed. They scored only nine runs off the last ten deliveries of the innings, losing three wickets in that time, to finish on 155 for 6. For a little more than two thirds of the Tallawahs chase – before Russell’s attack – that total looked like it would be enough