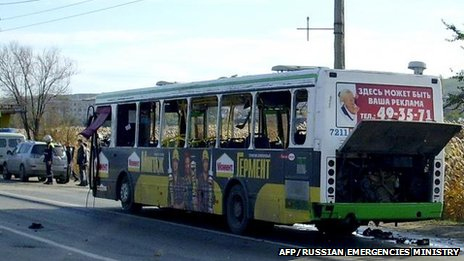 (BBC) An explosion that killed at least five people on a bus in the southern Russian city of Volgograd was caused by a bomb, Russian officials say.

They suspect a female suicide bomber – the partner of an Islamist militant – carried out the attack.

The North Caucasus, to the south, has seen many attacks by Islamist militants in recent years.

It is believed there were 40 people on board the bus, the BBC’s Steve Rosenberg in Moscow reports.

He says that all buses in Volgograd have been ordered back to their depots to be searched for any sign of explosives.

One man whose daughter survived the explosion told Moscow Echo radio: “It was a powerful explosion – a huge blast. There were lots of students on the bus.”

Earlier reports had suggested the blast might have been caused by an exploding gas canister.

Vladimir Markin, of the Investigative Committee – Russia’s equivalent of the FBI – told the RIA Novosti news agency: “A criminal case has been opened under articles outlining terrorism, murder and the illegal use of firearms.”

Other news agencies quoted sources at the committee as saying the suspected suicide bomber was the partner of a militant Islamist. One source said the woman had recently converted to Islam.

In recent years, Russia has seen a number of attacks by women suicide bombers, known as black widows, who are often related to Islamist militants.

They were also believed responsible for explosions on two passenger jets at a Moscow airport in 2004 that killed about 90 people.

Separatists in Chechnya have fought two wars with Russian forces over the past two decades.

But the violence has spread across the North Caucasus in recent years, including to mainly-Muslim Ingushetia and Dagestan.

Hundreds of people, including members of the government and security services, have been killed.

President Vladimir Putin has stepped up security in the North Caucasus ahead of the 2014 Winter Olympics, which open in the Black Sea resort city of Sochi on 7 February.